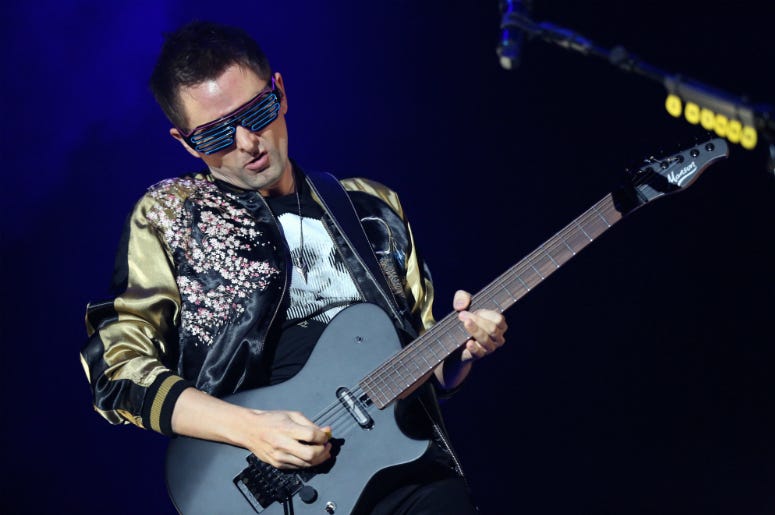 With today's release of Muse’s new single “Something Human,” Matt Bellamy divulged his favorite lyric from the track in our exclusive interview... “the opening line,” he admits.

(Easter egg: if you want to hear all the lyrics clearly, call the phone number listed on the city limits / population sign in their new video: 213,340,5057). The first song Matt has written on an acoustic guitar in 15 years, “Something Human” represents the “softer side of the forthcoming album” says Bellamy.

While chatting new music, he and Dom Howard revealed the more “rock” song to follow. Details at the one minute mark in this video:

Further, we asked the guys the secrets from the set of their new music video… According to our moon phase calendar, tonight’s “first quarter” moon illuminates exactly half of its surface. Whether it’s the left or right half depends upon where you are on earth.

BUT, if you’re in virtual reality with Muse and their video director Lance Drake, you may experience a nostalgic chase where a full moon tosses light on references to both Back To The Future (complete with spinning license plate) and Teen Wolf. In fact, it’s tough to tell which classic Michael J. Fox film character Matt channeled more, Marty McFly or Scott Howard.  Their simulated world even has a throwback to Blockbuster Video, “an end to the VHS era,” says Matt. However, Bellamy is clear on the ending – “that was actually my idea… the first scary film I saw was An American Werewolf in London…”

Grab "Something Human" here. And learn how to tame one’s inner beast (and check out all the throwback video references) in the official video here:

news
Can you take pain relievers after getting the COVID-19 vaccine?
news
Some wealthy Americans accused of getting vaccines before they're eligible
sports
Why are Patriots fans pulling for Tom Brady, but not Rob Gronkowski?
sports
Terrell Owens: 'I don’t regret anything about my career'
sports
WATCH: Yadier Molina makes pitching debut in professional game, strikes out batter