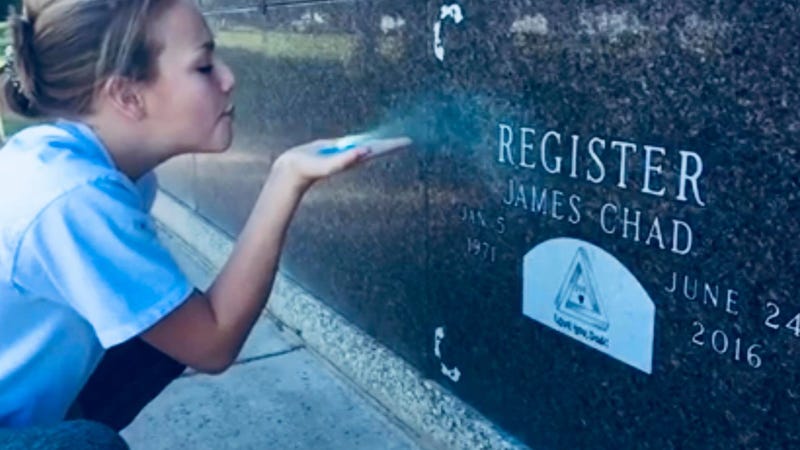 When Diana Register visits her husband, Chad, at the cemetery, she and her 15-year-old daughter Kaitlyn have a unique way of honoring him.

Instead of flowers, the two leave glitter. The sparkly dust reminds them of when Kaitlyn was a competitive gymnast and would spray it in her hair, often getting it all over the Register family, sometimes even on Chad’s police uniform, Kaitlyn says.

“It’s funny because one day he told us that one of his partners noticed that he was shining because of all the glitter on him when he was writing a ticket.”

In a blog post on Love What Matters, Diana says the glitter is an even more touching tribute for the Idaho family because Chad, who lost an 18 month battle to pancreatic cancer, was laid to rest in mausoleum, where there’s little space for flowers, making glitter the perfect way to show their love.

“Blowing glitter on his grave is something I really like to do because it reminds me of those times and just being with him,” Kaitlyn says.

It is how this family's honors a beloved husband and father in a way that really shines.

Diana is managing the #iam149 foundation in her husband's name to benefit pancreatic cancer patients. Her book, “Grief Life,” that will include this story and more, will be released next spring by Higher Ground Books & Media.