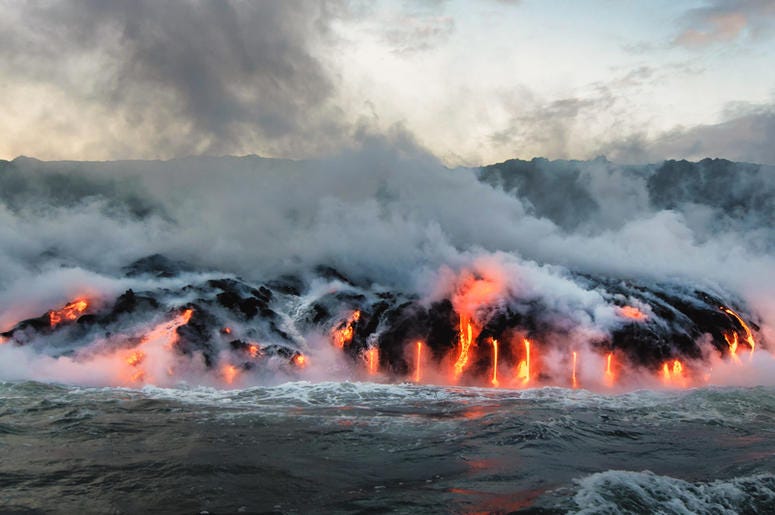 The volcanic activity from Mt. Kilauea is creating some awful problems for the people of Hawaii - the vog alone is tough on the ol' lungs (volcanic fog = vog). But with anything radical like that, there's gonna be humans being all human-y and doing asinine things.

"Think I can jump my mountain bike over that lava?"

Ever since the volcano began spewing lava, people have been tweeting at the US Geological Service with questions like, "Is it safe to roast marshmallows over volcanic vents?"

Erm...we're going to have to say no, that's not safe. (Please don't try!) If the vent is emitting a lot of SO2 or H2S, they would taste BAD. And if you add sulfuric acid (in vog, for example) to sugar, you get a pretty spectacular reaction.

First: bummer. Second: WHAT HAPPENS WHEN YOU MIX SULFURIC ACID WITH SUGAR?!?

The whole Obi-Wan thing is a lie. Vader got this way from mixing sugar and sulfur on the lava planet Mustafar!

I feel terrible for the people of Hawaii. Though it's a dream to see hot lava right up close and in the non-smoldering flesh, having it be so close and ruining homes and lives sucks. Still, someday I'm gonna see that lava and respect the Earth on a deeper level.

We don't have much in the way of human technology that will slow down that eerily creeping ooze. Let this blog serve as the (probably non) legal proof needed when my wife says my dying wish is to have my whole corpse thrown into a volcano, I mean it!

Please enjoy some lava at night from space. https://t.co/68StfKc2oi pic.twitter.com/6O5liY4Xy6