(WFNZ) -- 1. LA Lakers: LeBron James-Anthony Davis
The answer for this is simple: The Lakers have two of the top five players in the league on their team. As a team, Los Angeles is still a question mark on how they'll gel and work together, but as a duo, it doesn't get much better. Unless injuries hamper James and Davis, which is very possible, these two should be a fun pair to watch. 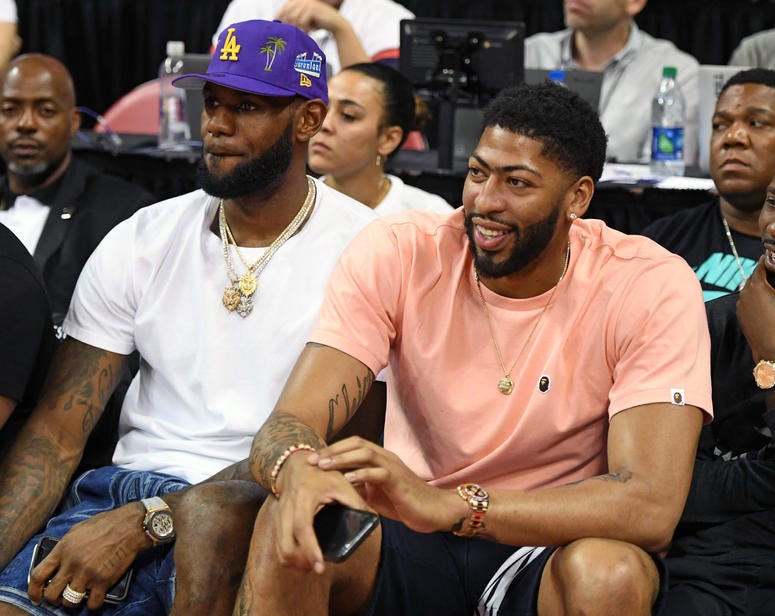 2. LA Clippers: Kawhi Leonard-Paul George
Leonard and George could easily take over the No.1 spot by season's end. Leonard proved during his championship run with the Raptors that he is arguably the best player in the league and George is coming off of an MVP  season. Together, these two could be the most complete all-around duos on offense and defense. Los Angeles is about to have some good times with their teams. 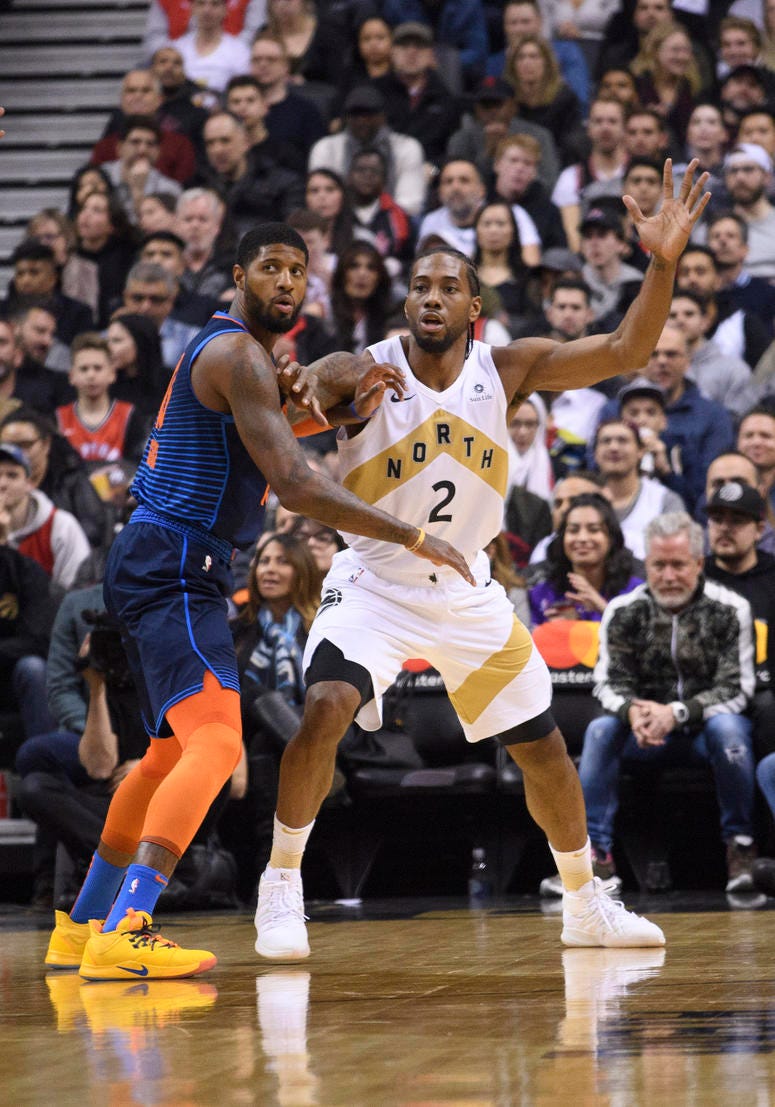 3. Houston Rockets: James Harden-Russell Westbrook
Harden and Westbrook have reunited. This time, Westbrook will take a back-seat to Harden compared to their 2012 Finals run when Harden was a sixth-man. This is an interesting pair and may not mesh well, but having a duo with two of the last three MVPs is no joke. The only problem could be one ball to play with and a lack of defense. 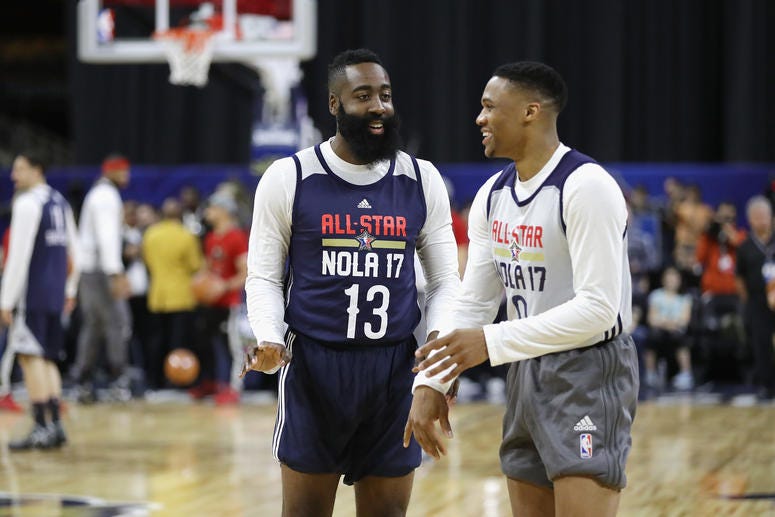 4. Golden State Warriors: Stephen Curry-*Klay Thompson
If Thompson wasn't out for the foreseeable future with a torn ACL, these two would probably get an honorary top two ranking due to the fact that they've won three titles and are the best shooting-duo in league history. However, Curry will have to rely on Draymond Green and D'Angelo Russell. Both are All-Stars, but Thompson and Curry have a chemistry that will be in the history books. 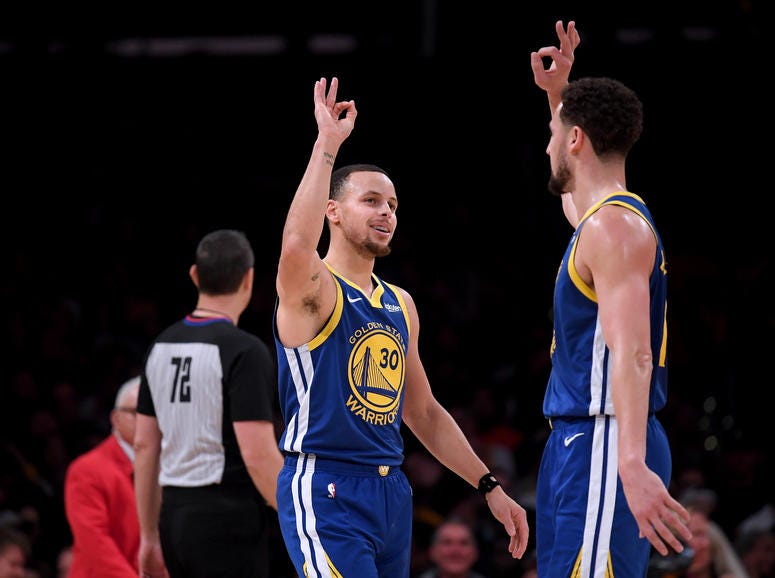 5. Brooklyn Nets: Kevin Durant-Kyrie Irving
The Nets won't have Durant next season due to his torn Achilles. If they did, this duo would probably be in the top three. I'm not even sure if when Durant comes back that he'll be the same player. But looking at what each player has done in their career, this duo has the potential to be really good when they finally join forces in 2020-21. 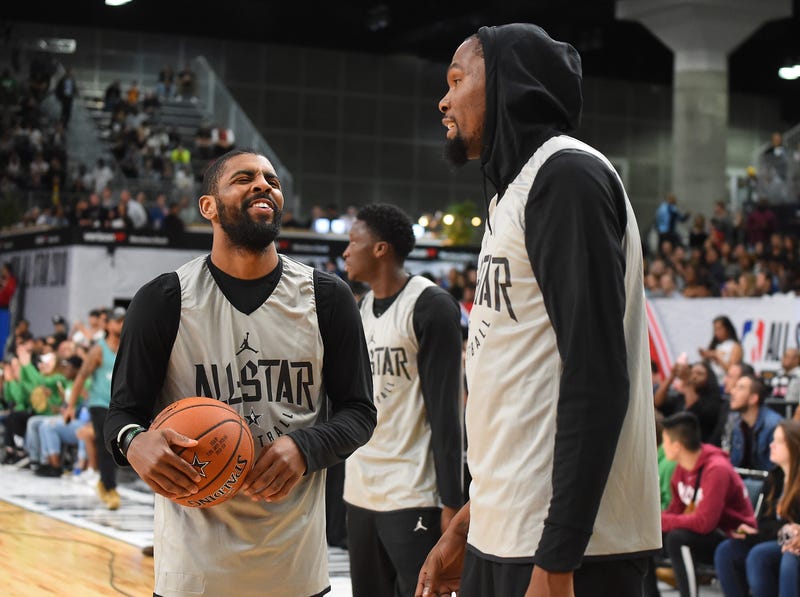 6. Philadelphia Sixers: Ben Simmons-Joel Embiid
These two have a few years of experience under their belt now and haven't reached the Conference Finals yet. The Jimmy Butler-era was short-lived and Tobias Harris will be returning, but Simmons and Embiid have a make-it or break-it season approaching. If Simmons and Embiid can't reach at least the Conference Finals this season, the Sixers may ultimately have to break the pair up to put the team over the top. 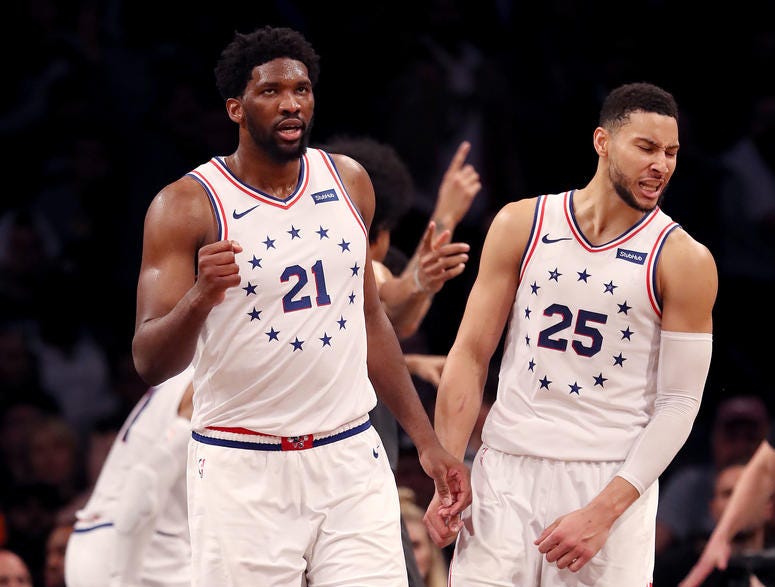 7. Milwaukee Bucks: Giannis Antetokounmpo-Khris Middleton
Middleton was an All-Star in 2018 but is in no means a superstar player. But with the reigning MVP Giannis on your team, the duo is automatically Top 10 worthy. Milwaukee was just one series win away from making the NBA Finals last year and they return a lot of the same players. 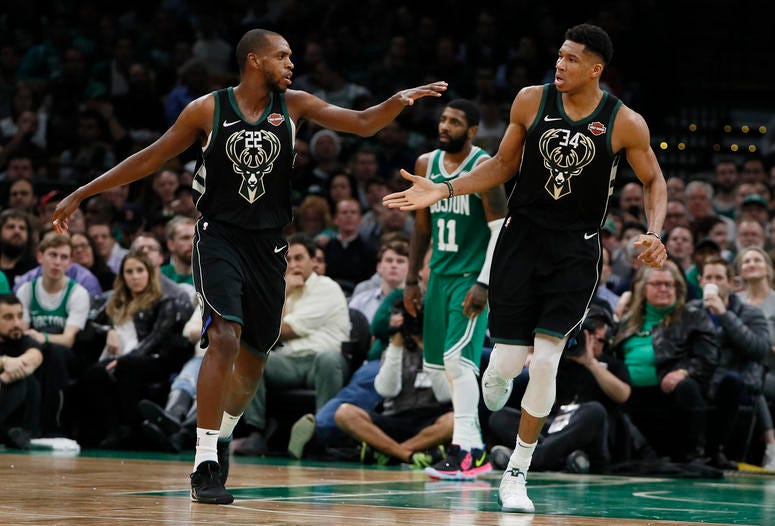 8. Portland Trail Blazers: Damian Lillard-CJ McCollum
Lillard and McCollum finally broke through and made it to the Conference Finals last season after struggling to win a series during their time together. Both are All-Star players that can shoot the lights out but it still seems like the Trail Blazers are a piece or two away. 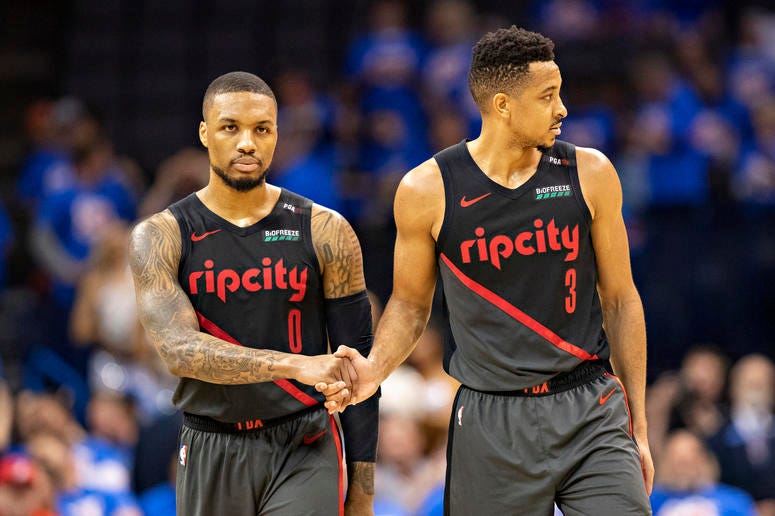 9. Utah Jazz: Donovan Mitchell-Rudy Gobert
The Jazz has been really good with Mitchell and Gobert the last two seasons and with former All-Star point guard Mike Conley now in the mix, the two could take an even bigger step towards becoming a championship contender. 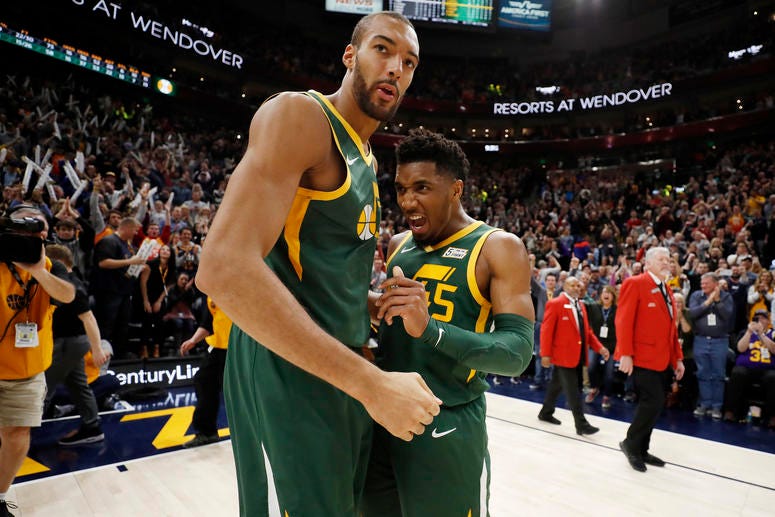 10. Boston Celtics: Kemba Walker-Jayson Tatum
The Celtics have a new All-Star point guard in Walker who could be a much better fit in Boston than Kyrie Irving was. Tatum is still an up and coming player in the league and Walker could help the Celtics finally find the identity they've been searching for. Tatum and Brown are rising stars and Walker will have a chance to finally prove what he can do on a good team. 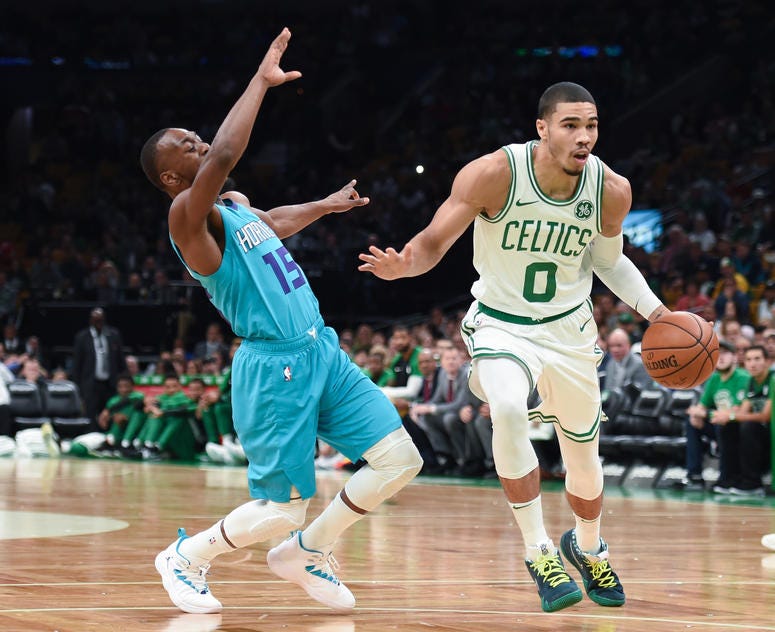 11. Dallas Mavericks: Luka Doncic-Kristaps Porzingis
Porzingis hasn't played basketball in almost two years but the last time we saw him he was playing like an MVP candidate. Doncic had a stellar rookie season and is a superstar in the making. Together, these two could be the best foreign-duo of all-time. 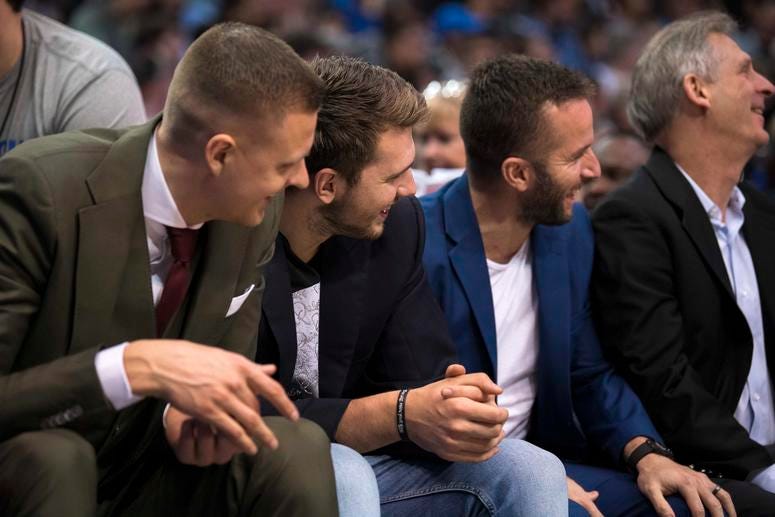 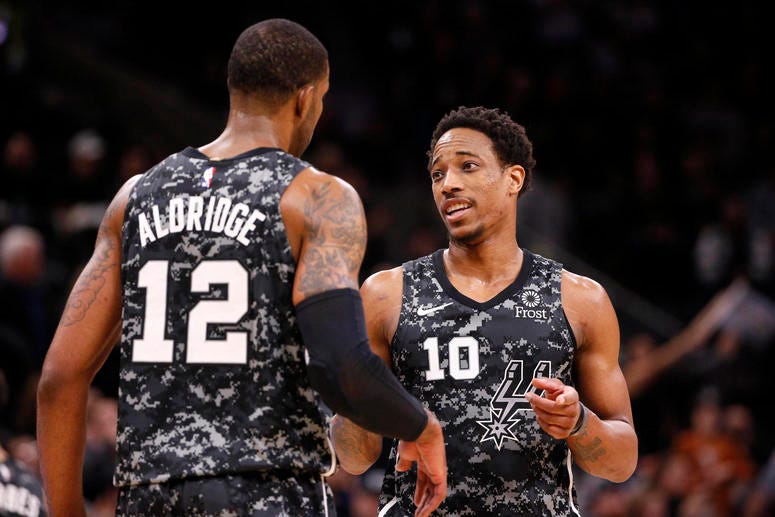 13. Denver Nuggets: Nikola Jokic-Jamal Murray
The Joker and Murray could easily move up this list if they have another strong season. Murray still has improvements to be made but Jokic is coming off an MVP-type season and is probably the best center in the league. Denver is still a piece away from being a title contender but Murray and Jokic are the focus point. 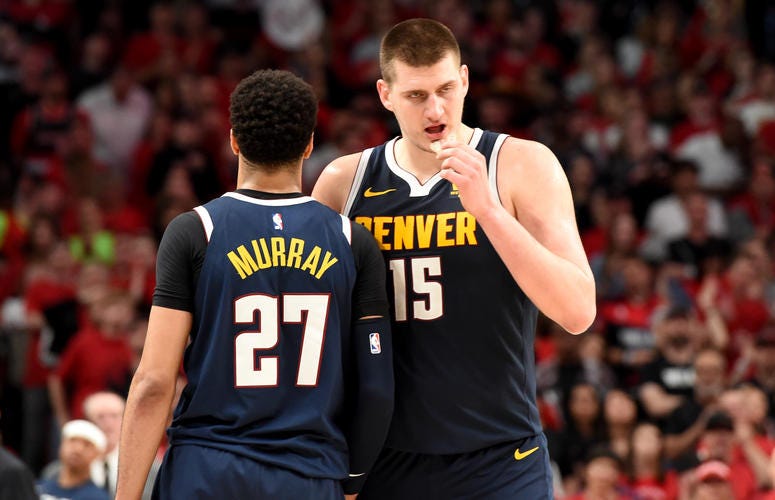 14. Detroit Pistons: Blake Griffin-Andre Drummond
Griffin and Drummond make the Pistons an average playoff team. They're both All-Star caliber players and that's where they're ranked. Right in the middle. 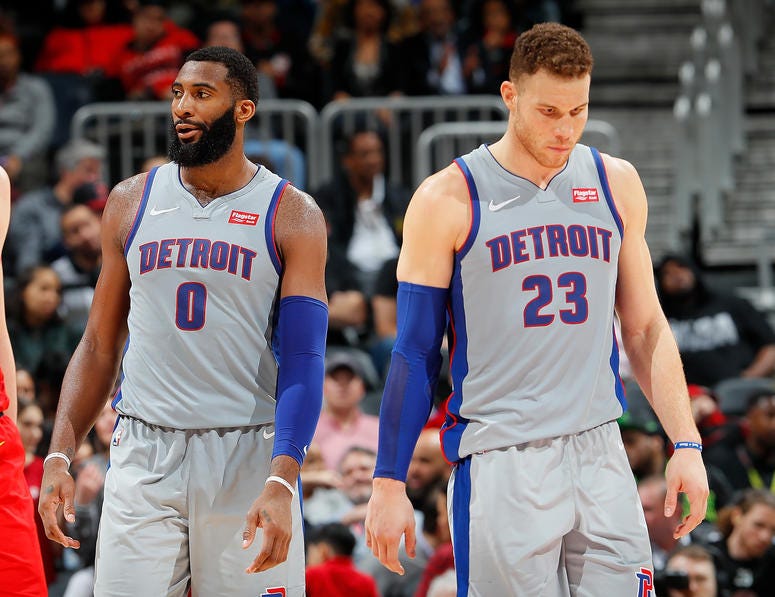 15. Indiana Pacers: Victor Oladipo-Myles Turner
Oladipo is expected to be out until at least December while recovering from a torn ACL, but when healthy, Oladipo and Turner are an all-star tandem that can move up this list. 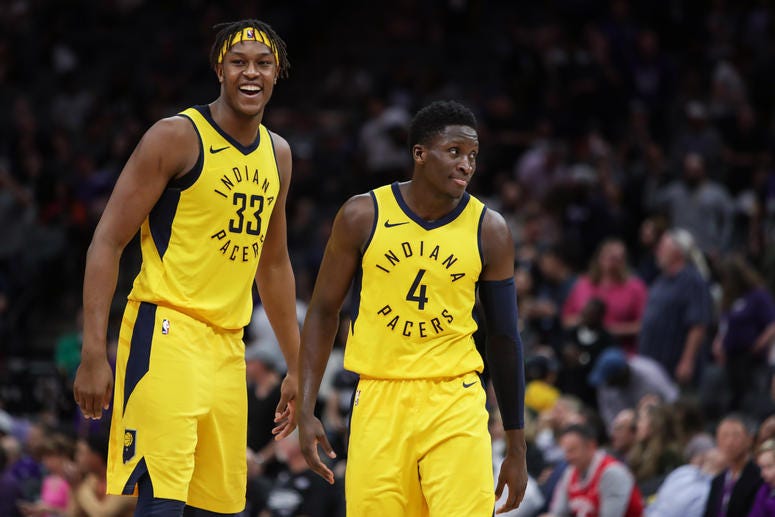 16. Minnesota Timberwolves: Karl Anthony-Towns-Andrew Wiggins
Four years ago, Timberwolves fans and NBA experts would have guessed that this duo would be a Top 5 tandem by 2019. However, a year of Jimmy Butler that seemed to have knocked the motivation out of Wiggins has many calling for Minnesota to trade the former No. 1 overall pick. Wiggins is extremely inconsistent and Towns has a lot of room for growth. 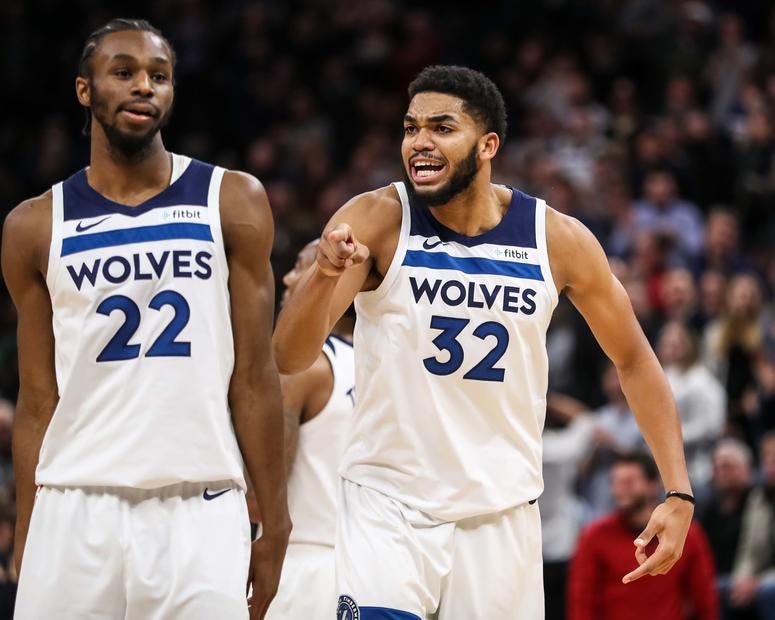 17. Miami Heat: Jimmy Butler-Justise Winslow
In a few weeks, this could be a Chris Paul and Butler duo. For now, Winslow will likely be the Heat's starting point guard alongside Butler on the wing. Winslow seems to finally be breaking out but there is still work to be done. Butler should help Miami continue to be a playoff contender. 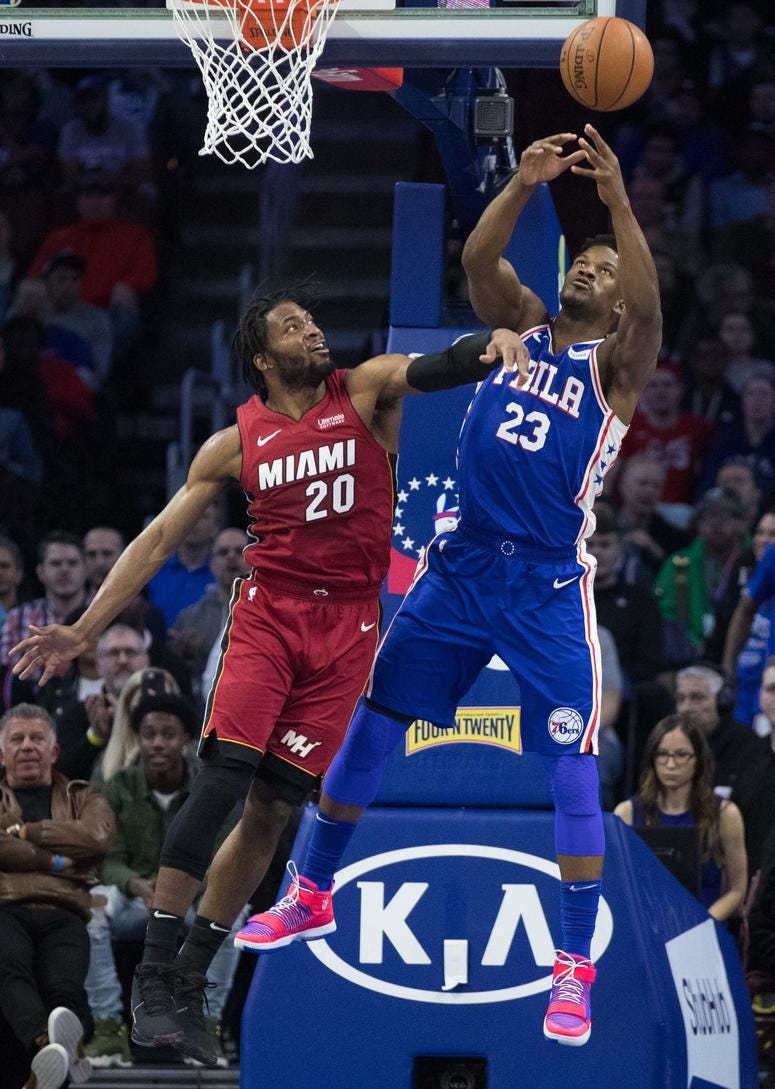 18. Toronto Raptors: Kyle Lowry-Pascal Siakam
The NBA Champions took a gamble on Kawhi and it worked for a season. Now, Lowry will have a new co-star in Siakam as Toronto looks to defend its title. The odds are slim but Siakam is the reigning Most Improved Player and Lowry is an All-Star. Siakam is expected to have an even bigger role next season with Leonard no longer in the picture. 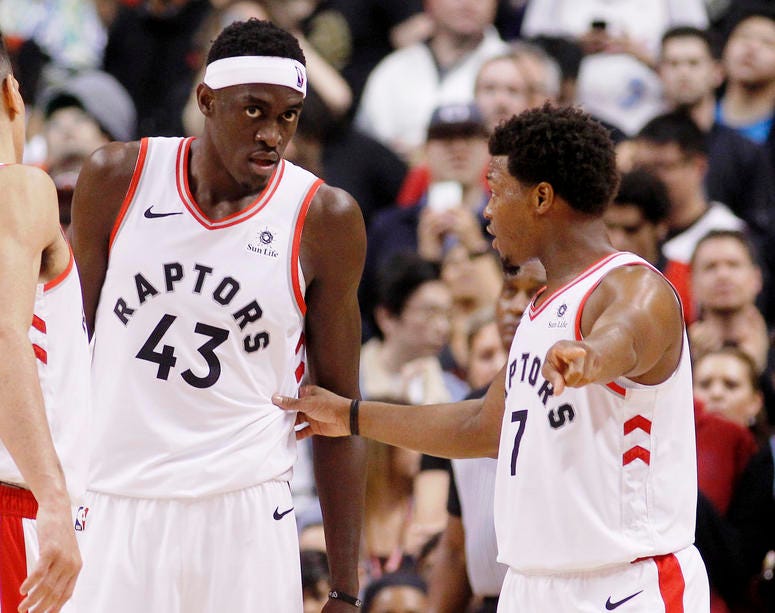 19. Orlando Magic: Nikola Vucevic-Aaron Gordon
Vucevic resigned with the Magic this offseason after his first All-Star appearance and Orlando's future looks bright with Vucevic and Gordon holding down the frontcourt. Coming off the team's first playoff appearance since 2011, Vucevic and Gordon are a good one-two punch but they're limited in potential. 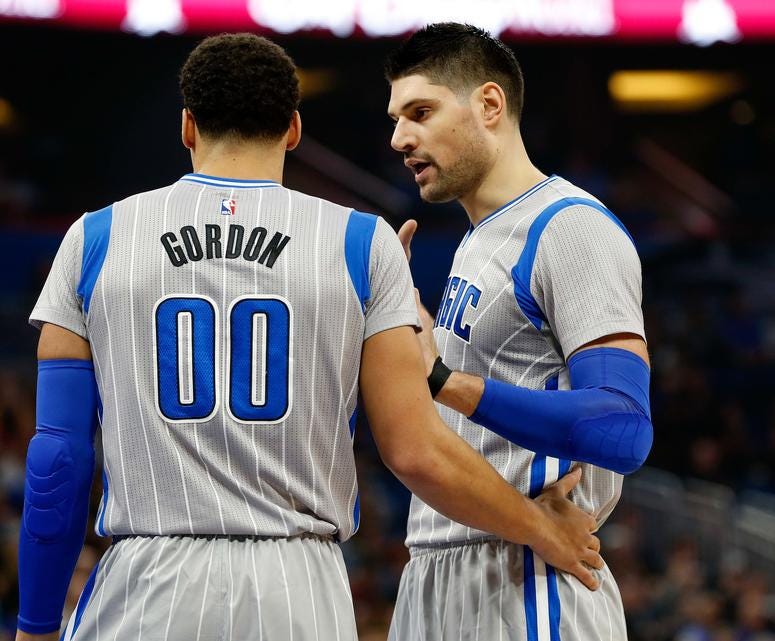 20. Chicago Bulls: Lauri Markkanen-Zach LaVine
The Bulls are in rebuilding mode and should figure out this season whether Markkenan and LaVine are the right players to build around. LaVine had a solid year last season and Markkenan looks like a future All-Star if he stays healthy but health is the main issues with these two. 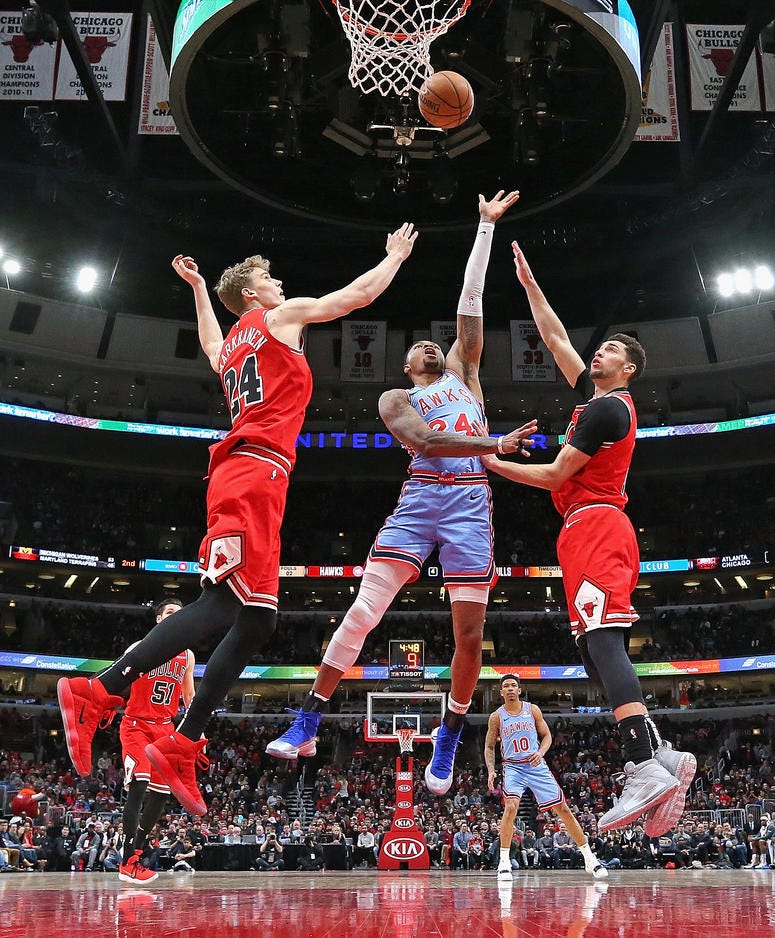 21. Atlanta Hawks: Trae Young-John Collins
If Young takes the next step and Collins becomes an All-Star this year, the Hawks duo can jump a handful of teams on this list. The future is bright in Atlanta. 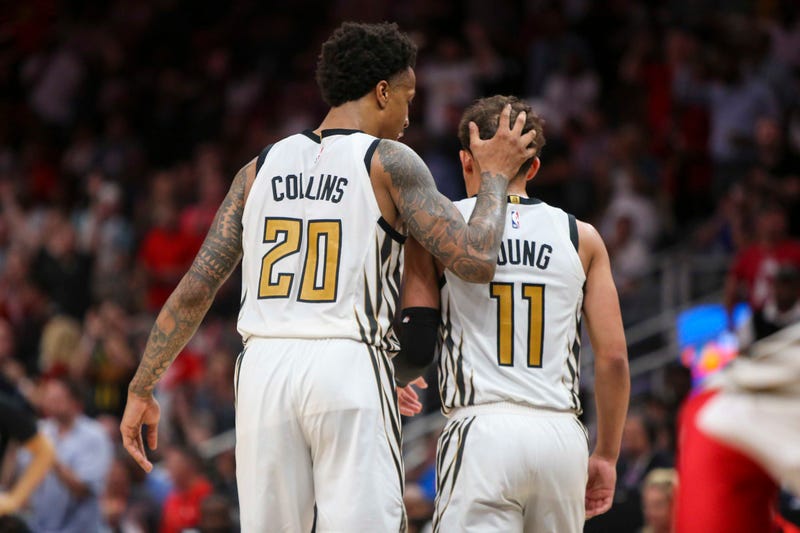 22. Sacramento Kings: Buddy Hield-De'Aaron Fox
Hield and Fox are currently a poor man's version of Lillard and McCollum. That doesn't mean Hield and Fox won't eventually reach that level but the young-guns in Sacramento have some work to do on the defensive side of the ball. 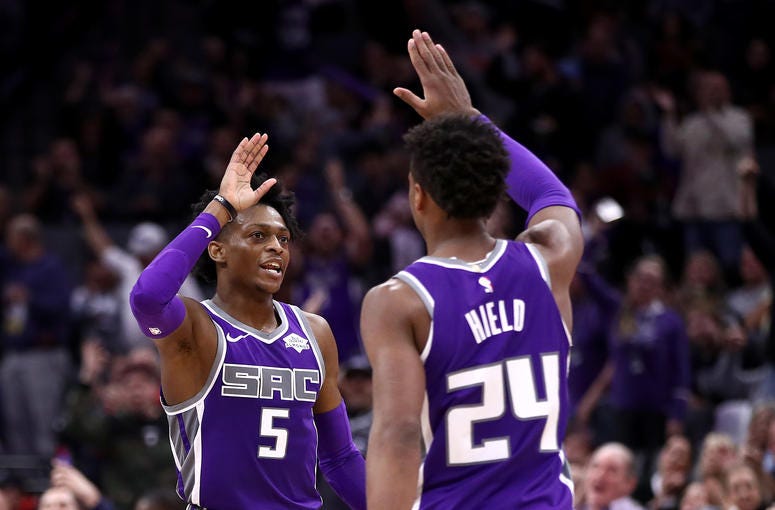 23. Phoenix Suns: Devin Booker- DeAndre Ayton
A lot of Booker's young career has already been wasted due to Phoenix being a mess of a franchise but Ayton showed potential last season. The Suns made some interesting moves this offseason but Booker and Ayton are very limited defensively. 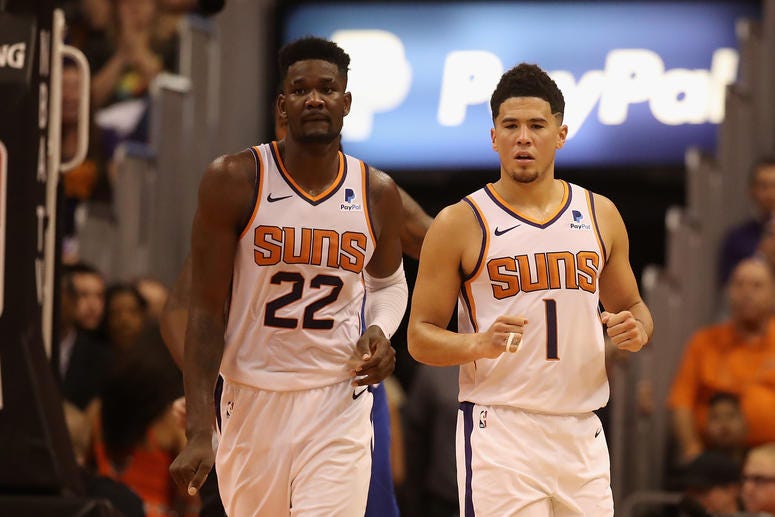 24. New Orleans Pelicans: Zion Williamson-Lonzo Ball
We have no clue what Zion is going to be but if he plays the way many expect him to play, the Pelicans duo will shoot up this list very quickly. Ball went through a lot with the Lakers but there is still potential. 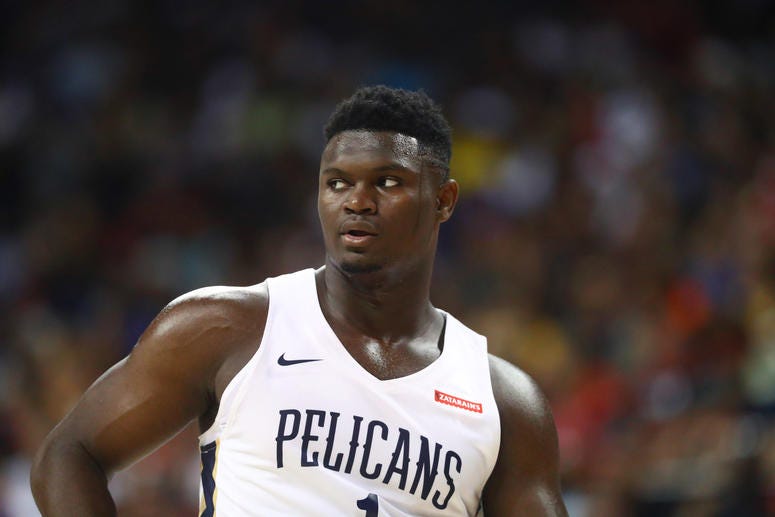 25. Oklahoma City Thunder: Chris Paul-Steven Adams
Oh, how far the Thunder have fallen. Just a week ago they had one of the league's Top 10 duos in George and Westbrook and now they're in the bottom five. Paul likely won't ever suit up for Oklahoma City and Adams could be another player traded sooner than later with the Thunder entering a full rebuild for the first time in over a decade. Paul and Adams are still solid players but once they're moved, the Thunder will likely fall close to the bottom of this list. 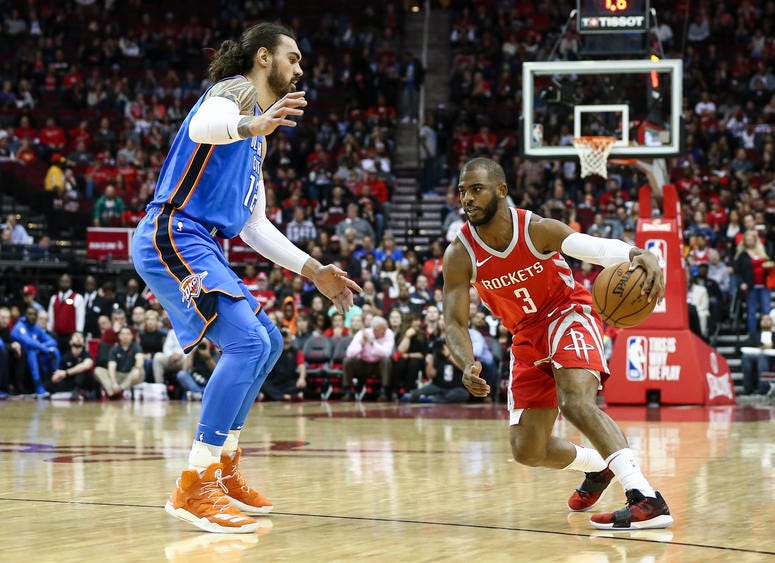 26. Washington Wizards: Bradley Beal-John Wall
This one is tough. Beal and Wall are both All-Stars but Wall hasn't played since tearing his Achilles and may never be the same player. Beal has been a hot trade candidate for months but Washington is set on keeping him. A few years ago this tandem would likely be in the Top 15 but Wall's health uncertainty has them low. We may never see them play together again. 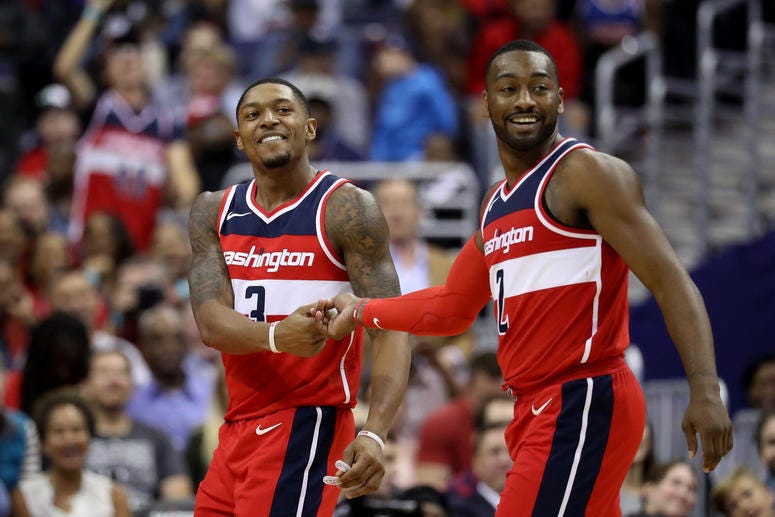 27. New York Knicks: Julius Randle-RJ Barrett
Remember when this was supposed to be Durant and Davis? Yea, well that didn't happen. Randle is a really good player and Barrett could be a star in the league but until then this duo is TBD. 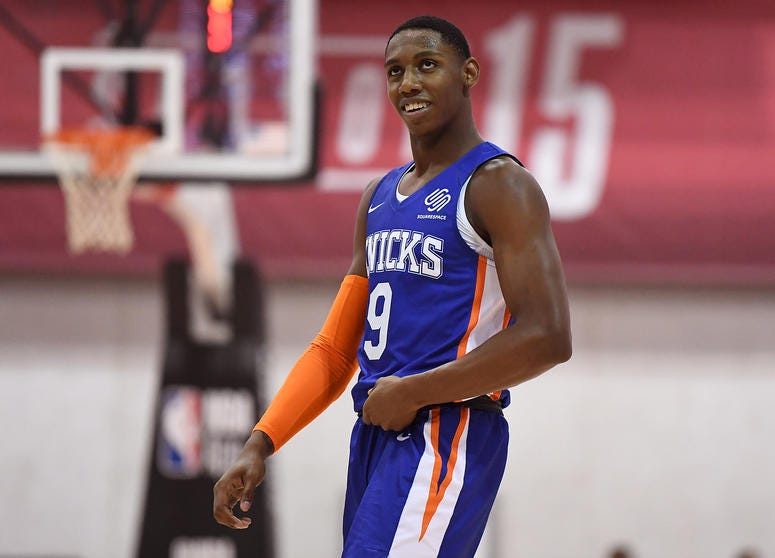 28. Memphis Grizzlies: Ja Morant-Jaren Jackson Jr.
Jackson Jr. was a really solid player before getting injured his rookie season. Morant says he is a "Point God." If Jackson Jr. becomes an All-Star and Morant really is what he says he is, look out for Memphis. 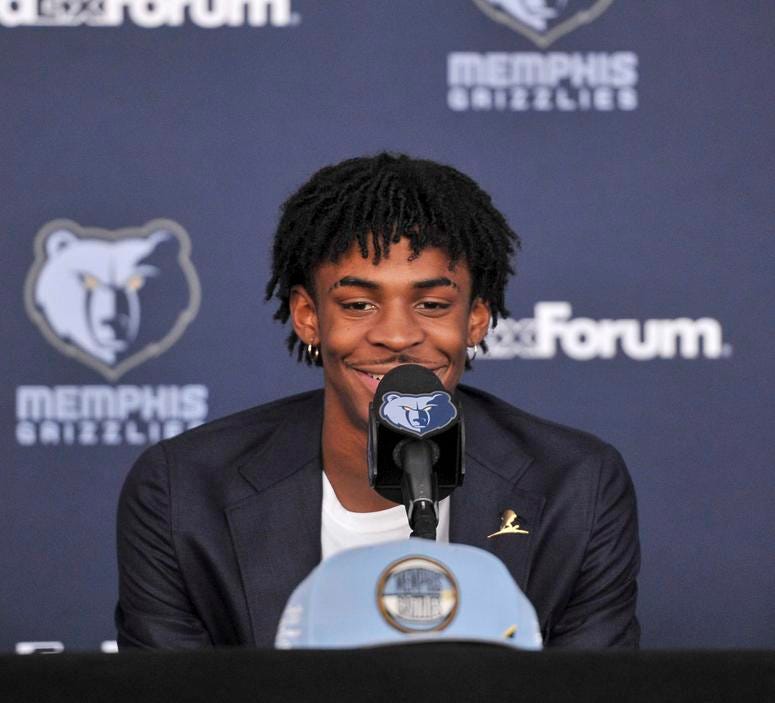 29. Cleveland Cavaliers: Kevin Love-Colin Sexton
Love probably won't be in Cleveland for long and Sexton may be replaced by rookie Darius Garland but until then, this is the duo. Love isn't who he once was and Sexton is very raw. 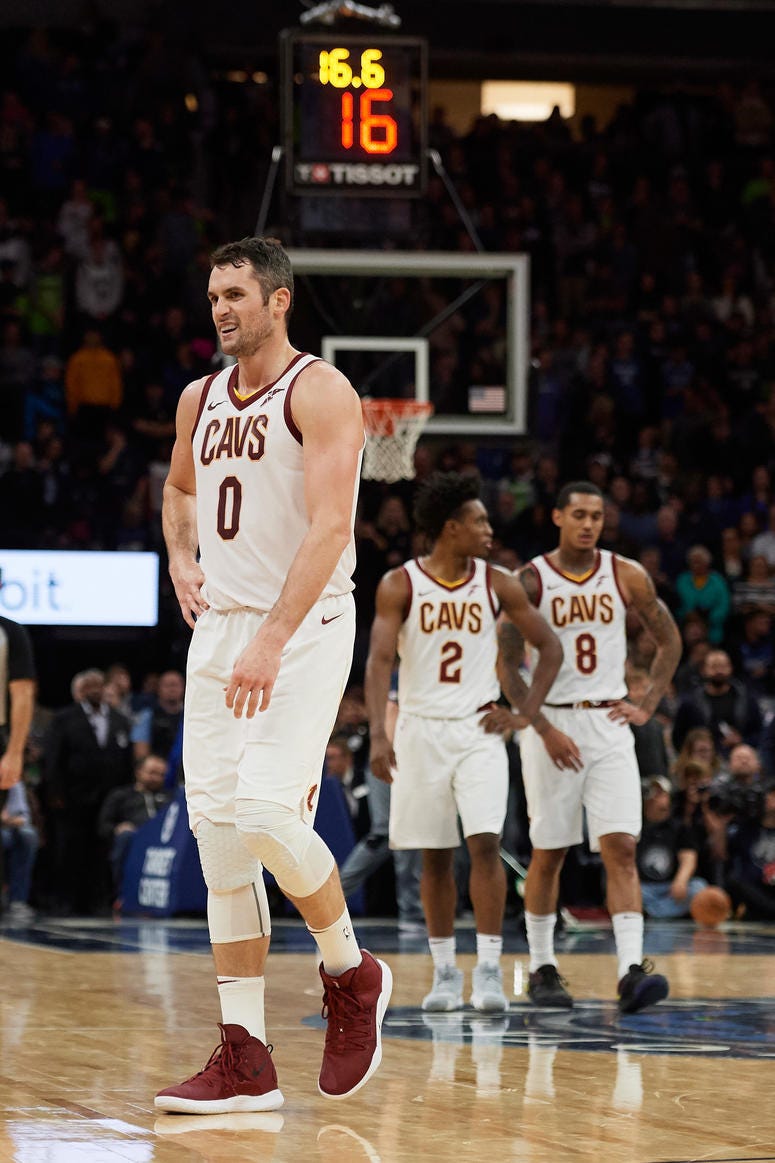 30. Charlotte Hornets: Terry Rozier-Miles Bridges
Sorry, Charlotte but this is going to be a long year. This could easily be Bacon and Bridges or Rozier and Bacon but that has yet to be seen. There is no true star player on the Hornets roster with Walker no longer around and it seems like head coach James Borrego doesn't even know what to expect. Bridges have the most promise on the team but it doesn't seem like there'll be one true go-to scorer this year. 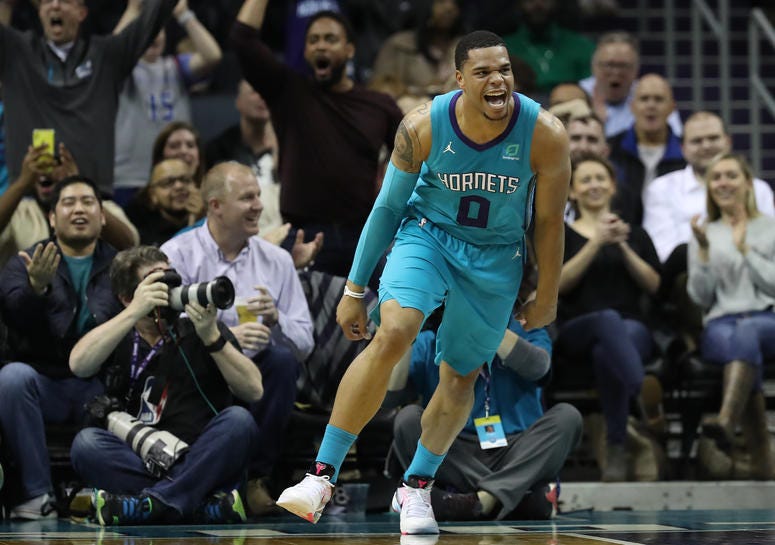