Though each NFL game is unique, and the league loves to pitch parity, there’s a notion that any team can win on any Sunday, Monday or Thursday, and the Giants are clear underdogs Monday night.

But New York (2-6) may feel some mojo against the Dallas Cowboys (4-3). Not just because the two teams share a division, or are on two ends of a longtime football feud. Not just because the home team won every NFL game on Sunday. The Giants should feel well, if not swell, because of the Jets.

It's hard to believe now, in the wreckage of their galling loss to the Dolphins, but the Jets indeed hosted America's team, on October 13, and won. The 24-22 squeaker is the Jets' only victory in 2019. So, it serves not only as a win for the hapless Jets, but also hope for the Giants.

When the blimps hover over the Meadowlands, the grills are doused, the tents are folded, and the well-lubed fans amble into MetLife Stadium around 8 p.m., there should be some optimism. Forget the fact that the G-Men have lost four straight games or the fact that they did not lead at any point in those games. The Giants get a pass this week because the Jets are such an abomination. And they can thank the football gods that they aren't the team feeling so green.

Before Big Blue and Gang Green settle the local score in Week 10, the Giants can earn some respect, and can cement their place as the team of record and import by scoring their third win of the season, which would triple the number of times the rudderless Jets (1-7) have outscored their opponents.

In fact, the Giants should thank the Jets for taking so much of the heat and focus from their woeful season. Normally, a 2-6 team would spend ample time on the skillet of sports talk radio, earning the ire of the media and masses as the stand-alone gridiron stench. 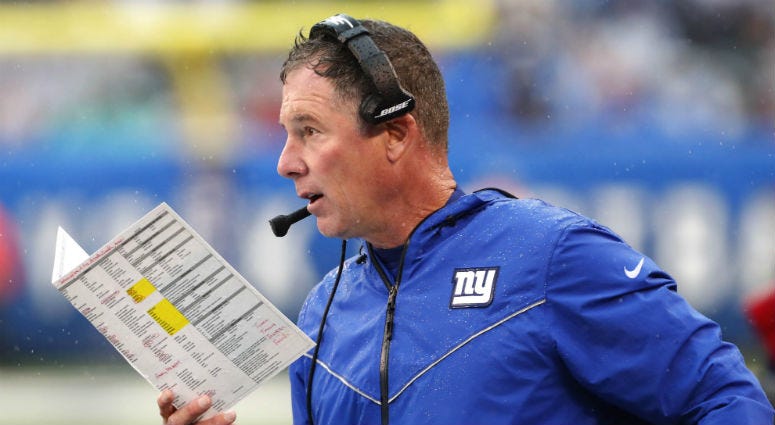 But for Monday, at least, the Jets have nudged past the Giants for the title as biggest loser. Their showing against the Dolphins - a symposium on stupidity - redefined the role of rock bottom. For all their foibles, the Giants have some structure, from the owner to the GM to the head coach. Fans may not love Dave Gettleman, or his homespun cliches and colloquialisms, but his role is defined. As is the role of coach Pat Shurmur, despite his dubious record.

The Jets handed the keys to Adam Gase, who had a losing career record, but at least had a reputation as a QB guru who earned the trust of Peyton Manning. Since then, Gase had his GM fired and has turned the team into a dumpster fire. His most important player sees ghosts, and his best player sees conspiracies.

And it seems Gase has swapped his headset for a clown suit. In the aftershocks of that implosion in Miami, Gase told the press that he was not embarrassed because this is the NFL, a statement that is equal parts hogwash and gibberish. The Jets are 5-19 since the start of the 2018 season. That’s the worst record in the league.

So, the Giants have that going for them. By contrast, the G-Men look downright decent, with defined roles and a few talented parts. Rookie QB Daniel Jones may have lost some of his luminous sheen, but he has a refreshing toughness and has refused to wave a white flag on the season. Saquon Barkley is still impossibly hungry and humble. The Giants just have to figure out how to stop spotting the opposition two touchdowns, as they have the last two weeks against the Cardinals and Lions.