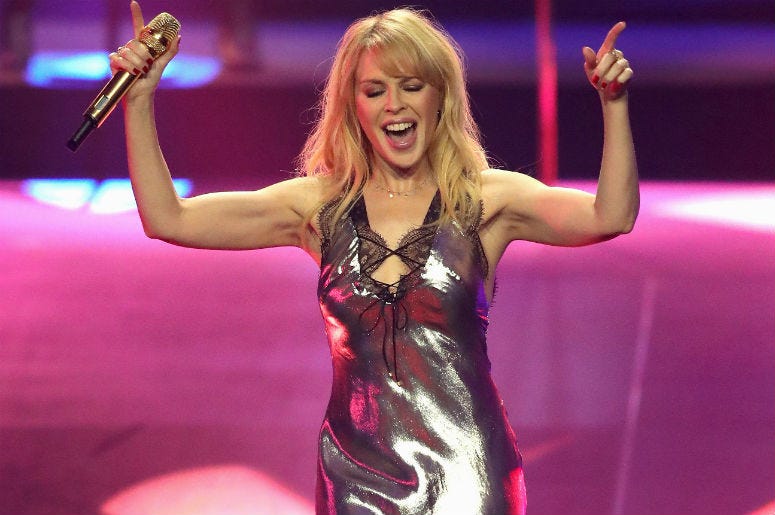 Kylie Minogue had a fabulous weekend in New York City, so it was only fitting that she shared a previously unreleased song about the city this week.

The dance music superstar was the headliner at this year’s Pride Island festival in New York City on Sunday (June 24), and on Monday (June 25) she performed an intimate show at the Bowery Ballroom in Manhattan.

Minogue performed songs like “Dancing” and “Stop Me From Falling” from her new album, Golden, during both shows. She also performed some of her more iconic songs like “All The Lovers.” However, she had a few surprises in store for fans during the show. During Sunday's Pride concert, Minogue even praised country music's influence on Golden by performing the hit Dolly Parton song "9 to 5."

The fun continued on Monday when Kylie shared a demo track with her fans at the Bowery Ballroom.

“This particular one didn’t fit the framework of the album (Golden),” Kylie said when introducing the song during Monday's concert. “But since we’re here in New York City, I thought I’d do something that I’ve never done before."

Wasn't it incredible how quickly the audience learned the lyrics to sing along? We'd be down to hear a studio version of this track soon, Kylie.

Golden, by the way, has perfectly blended pop and country music to make us feel like dancing! Click here to purchase the album right now.

UP NEXT: Kylie Minogue Dishes on Recording Her Album in Nashville