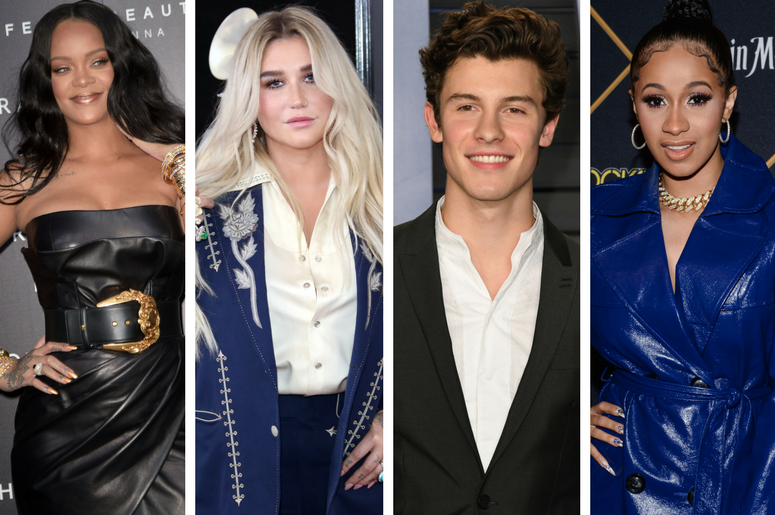 Time Magazine just revealed its annual list of the 100 most influential people in the world, and a few of our favorite musicians were included this year.

Rihanna, Kesha, Shawn Mendes, and Cardi B, are among the musicians featured. Each star was honored with a short write-up from a peer.

Adele wrote that Rihanna “makes her own rules and bends ours,” in the tribute. Rihanna was named an Icon by Time Magazine. Meanwhile, Taraji P. Henson honored Cardi B by saying, “Cardi B’s here to stay, baby, and I’m happy to be a witness.” Cardi B was named a Pioneer by the magazine.

Cyndi Lauper wrote a blurb honoring Kesha, who was also named an Icon, saying, “Thanks to Kesha and other women who have stood up for themselves to demand justice and fairness, we are starting to turn a new page.”

Shawn Mendes was honored by one of his heroes, John Mayer. "(Shawn) knows that music is good shelter from its own associated nonsense, and his devotion to his craft is exactly why people twice his age are welcoming him into their lives and playlists," Mayer wrote.

Others making the list were Tiffany Haddish, Issa Rae, Hugh Jackman, Roseanne Barr, Prince Harry, J.J. Watt, Jennifer Lopez, and many more. You can see the entire list over on Time’s website by clicking right here.