Today is Here And Now release day for Kenny Chesney, and RADIO.COM had a chance to be with him remotely this morning to celebrate.

Being present, almost too present, in the here and now is a feeling we can all relate to in times of crisis. Thankfully, good news like brand new music from Kenny Chesney is here to lift us up.

Chesney tells New York's Country 94.7's Kelly Ford in NYC that he wrote the album's title track before the current pandemic but admits the song has new relevance now. "It's always been really hard for me to be still, and to live in the moment," he says. "Ironically enough, one of the places that I actually feel like I do that is when I'm on stage, and I love that I get to share that experience with a lot of people that care about the music. I'd like to believe they're in that moment with me. That's what makes it so beautiful." 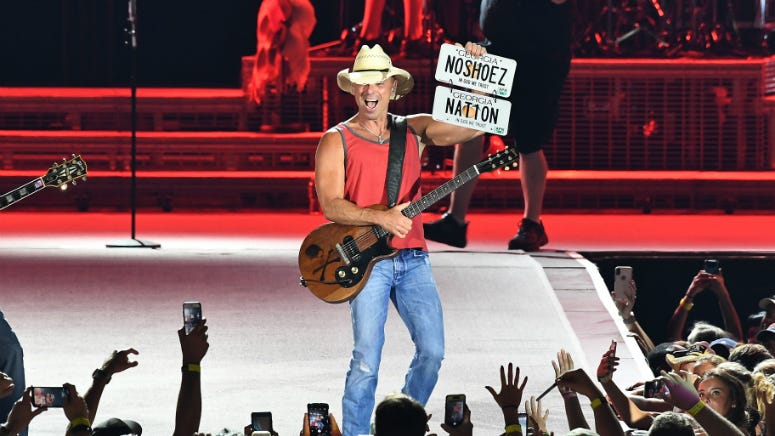 We can all appreciate the healing power of music at times like these. Although it was a debate, Chesney says the decision to release the album now came easy.

"As you know, I have always felt in my own life, no matter what kind of funk I'm in or where I'm at in my life, that music is something that I really lean on. There's a lot of positive energy in this album and I wanted people to hear it!"

As far as getting back on the road, Chesney says he's "cautiously optimistic." As a big sports fan and someone who performs massive stadiums, he says he's following the NFL's lead.

"We're just kind of watching to see what they do... that's kind of gonna dictate when we get back to work."

@noshoesnation, Here And Now Livestream next Friday May 1 at 6 pm CT.  Comment with your questions.  See you then. #hereandnowlive⁣ ⁣ Link in bio to preorder #hereandnow.

Although he is unable to connect with fans face-to-face during this time of social distancing, Kenny has found a way to virtually celebrate the release of his new album, hosting a live stream event on release day, Friday, May 1. The 30-minute Q&A session and performance will air across all of Kenny's social media platforms at 7PM ET / 4PM PT.

Fans can submit questions and comments, which he and his team will sort through before the event, and Kenny will answer the most popular ones during the broadcast.

“I always tell people No Shoes Nation is a country without borders, where everyone’s welcome. With 'Here And Now,' we’re taking that idea into a whole other dimension," Kenny says. "This album’s a whole lot of people, places, moments we’ve all been, lived and understand. Let’s get together and kick this album off right.”