Mark Hoppus, Travis Barker, and Matt Skiba of Blink-182 stopped by the Kevin & Bean Show on KROQ in Los Angeles this week to talk about their tour with Lil Wayne, their latest album NINE, and announce that they will be playing the KROQ Halloween Costume Ball.

"I don't know that we've... played on Halloween," Hoppus said, when asked about playing any Halloween shows in the past, "Most of the time I think we were home because we normally tour during the summers and during the spring."

"Can I tell you what my costume is?" Hoppus asked. "I'm gonna take two Post-it notes, I'm going to write 'always tired', put them under my eyes and I'm 'Post-it Malone'" he explained as everyone erupted in laughter. "I've been waiting to bust that out forever. I was gonna do it on Twitter but then it just seemed like the right moment now."

"At the Playboy Mansion we dressed up like the bad guys from 'Karate Kid' and we wreaked havoc," Travis added about his own costume experience. "I got away with so much."

When the topic of their latest, sometimes tumultuous, tour with Lil Wayne came up, they confirmed that things were still great between the two acts. "He was awesome, his band was amazing...it was so fun all summer long," Hoppus confirmed, assuring that the few minor issues never stopped them from having a great tour together, "It was awesome all summer." 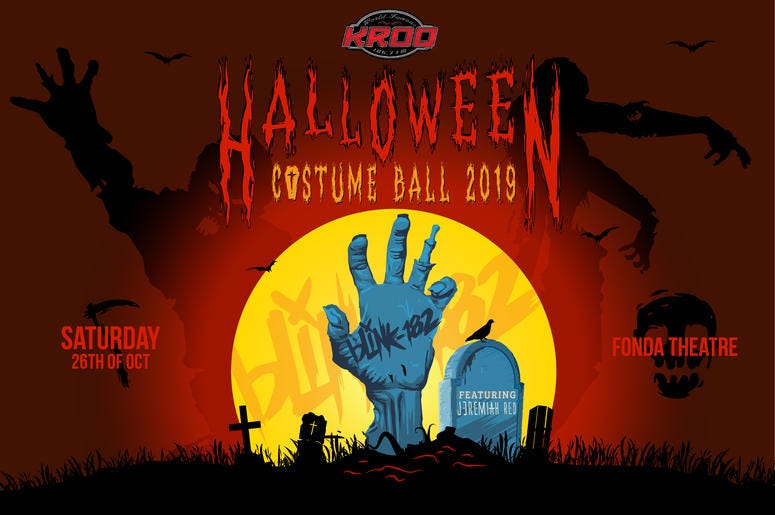 You can enter to win your way into the KROQ Halloween Costume Ball here, and hear much more from Blink-182 above.