Tom DeLonge, longtime friend of KROQ and former Blink-182 member, stopped by The Kevin & Bean Show to talk about the new music and tour from Angels & Airwaves, plus he talked about his UFO television series, Unidentified: Inside America's UFO Investigation, which aired as a 6-part series on The History Channel.

It's been 6 years since the last Angels & Airwaves tour, although music has slowly trickled out since the release of 2014's The Dream Walker.

"I saw an opportunity to bring Angels back and go on the road for a little bit because Blink's really monopolizing," DeLonge said. "If I was going to do Blink, I can't do anything else because it's just a machine that goes all the time. So Angels I thought, 'OK, I'll just go out for these 4 weeks, this is cool.' Then the tour sold out in 11 minutes, not the whole thing, but a big chunk of it," says DeLonge. "I sat back and was like 'Oh my God,' so let's put the album on a label, let's do this, let's do this... the next thing I know it's like full time." 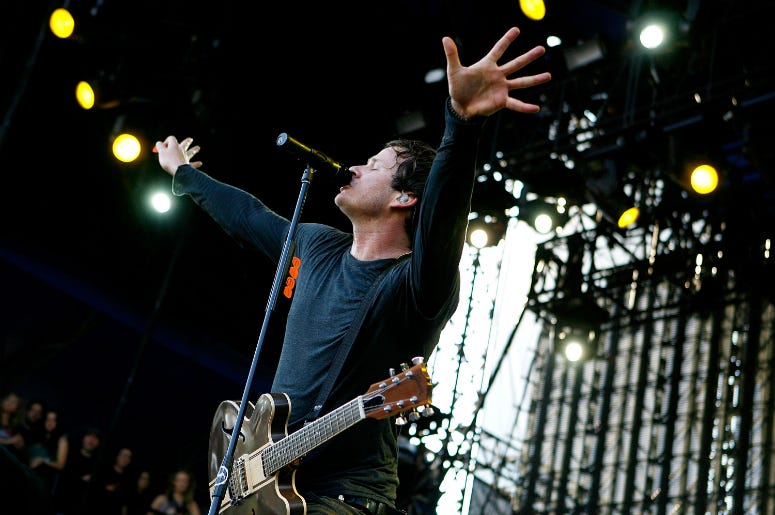 The topic turned to Tom's interest in UFOs, his high-level government connections and what he's learned about the fascinating and controversial subject.

"I went through some Department of Defense officials, and then I went through NASA," DeLonge explained. "Eventually, I got connected to the general who holds the keys to all this stuff, but it was hard to get to him. I had to really plead my case as to why this was good for the country, why it was good for young people, why it was good for the world, and how I can help. They finally said 'We're going to introduce you to somebody,' and when that happened it was like 'Oh my God.' That conversation was lifechanging. That was me in the back of a booth with this guy that sat down at the table in a vacant restaurant. This topic is really scary. It's like 'UFOs, wow there's these things in the sky,' well it's much bigger than that. It's much, much, much bigger than that."

DeLonge is the founder of To The Stars..., the goal of which is to be a vehicle for the disclosure of the UFO phenomenon. For the past 24 months, they've been involved with briefing the Senate and multiple committees in Congress. "It's not just people in urban areas that see this stuff. It is pilots and generals and astronauts. It's not just like 20 incidences, it's thousands and thousands of incidences," said DeLonge.

Tom also talked about the "Area 51 Raid" movement that has taken on a life of its own through social media and why it's a bad idea.

"I totally advise against it for a variety of reasons," he warned. "Number one, it's not going to change anything. Number two, people can get hurt. And number three, there's really good reasons for things being secret. And I used to think it was because we couldn't handle it, or I used to think because these guys want power, or oil - it's all these stupid conspiracies. It's none of those things. It's scary. You have a bunch of guys who do not sleep at night that are dealing with this stuff so we can go to soccer games and all that. The real way to get change is dealing with a corporate issue. It's a buearcratic issue. The way things are kept secret are mechanisms that are there since World War II for really good reason. So what we need to do is change the law, and the law would pry the mechanism loose of how it's secret."

Check out the latest single from Angels & Airwaves, called "Rebel Girl," below and get tickets to see them at the Belasco Theatre or House of Blues Anaheim this October. A new album and feature film combo will be coming out later this year, which DeLonge co-wrote and will be directing.