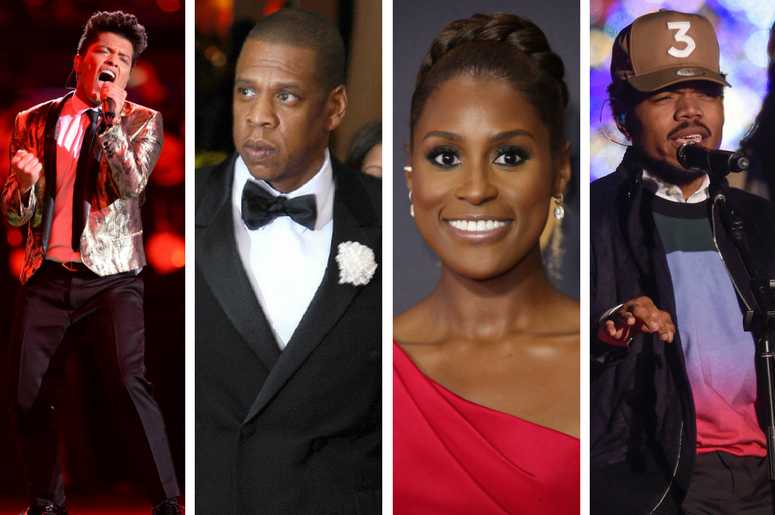 A list of nominees has, perhaps, never been more star-studded than the one for this year's 49th NAACP Image Awards.

Nominees for the night's highest honor, Entertainer of the Year, include the creator, co-writer, and star of HBO's Insecure, Issa Rae, Chance the Rapper, JAY-Z, Bruno Mars, filmmaker Ava DuVernay, and actor Chadwick Boseman. Each nominee took 2017 by storm with their artistry. Rae's hit HBO show is based on her highly acclaimed 2011 web series Awkward Black Girl. Chance, in addition to being one of hip hop's brightest young stars, won a three Grammy Awards in 2017, including Best New Artist and Best Rap Album for Coloring Book - the first streaming-only album to ever win a Grammy. JAY-Z returned this year with the most introspective album of his already iconic career. Bruno Mars continued to show why he is one music's top acts both in album and concert sales. DuVernay's Queen Sugar has become one of television's most watched series, with a third season on the way. Boseman was critically acclaimed for his role as Thurgood Marshall in Marshall, but is on the verge of mega-stardom when re reprises his role as T'Challa/Black Panther in Marvel's solo Black Panther film.

Other individual nominees this year include Idris Elba for his role in The Mountain Between Us, Octavia Spencer for her role in Gifted, Halle Berry for her role in Kidnap, ex-NFL player Nnamdi Asomugha for his role in Crown Heights, Regina Hall, Dwayne Johnson, Kerry Washington, Khalid, SZA, Charlie Wilson, Kendrick Lamar, Beyoncé, Brian McKnight, and many, many more.