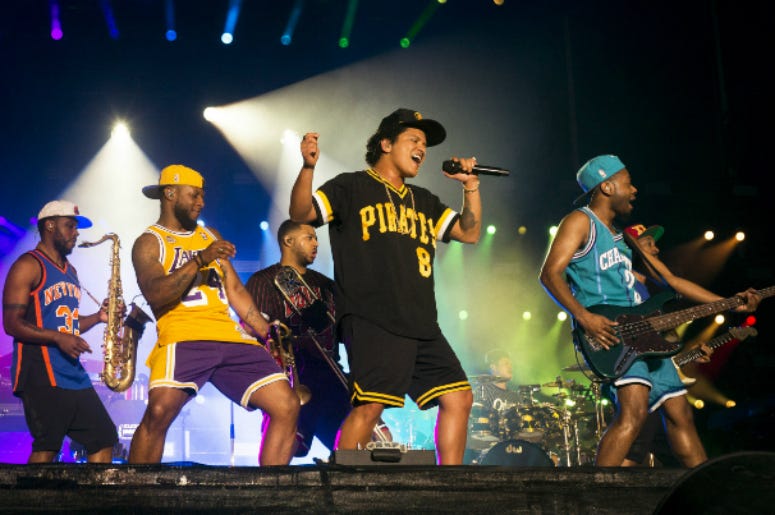 Bruno Mars and his band, The Hooligans, were performing a stunning show Tuesday night at Glasglow Green in Scotland when they almost had to "call the po-lice and the fireman."

A usual Bruno show includes multiple levels of production. Lights, sound, visuals, backup dancers, pyrotechnics, and even fireworks. But, when you play with fire, sometime's it get's "too hot, HOT damn!"

One of the fireworks used during the Scotland show misfired and ended up landing on the lighting rig hanging from the top of the stage. It was a small fire, but no matter the size, safety is always a concern. Bruno and his band were quickly taken off stage for eight minutes while the crew extinguished the flames. This was put on screen for the audience to see:

Bruno Mars is on FIRE 🔥😍 (no, seriously... they’ve had to temporarily stop the show because of the fireworks 🎇...) thanks to the team for extinguishing 👨‍🚒🚒 pic.twitter.com/G8PCQ13FvU

Bruno and his band then took back to the stage and improvised this chorus to get the show's momentum back:

#BrunoMars confirms the stage went on fire here at Glasgow Green due to a pyrotechnic which forced a temporary pause in the show. He then sings “we burned the stage down in Glasgow”. @BrunoMars pic.twitter.com/a8V6CqlOQz

Thankfully, there were no injuries.