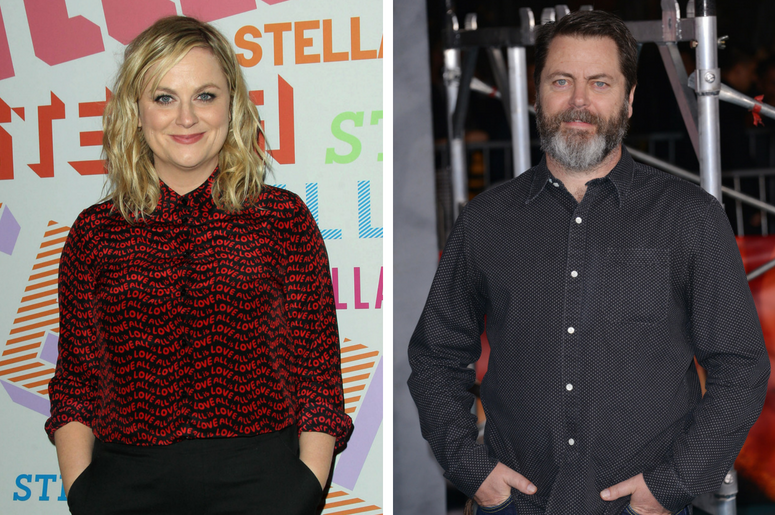 Sarcastically sassy yet super-sweet Amy Poehler and notoriously knock-you-out-of-your-chair hilarious Nick Offerman are set to host a crafty competition with a comical catch -- they'll both be partially portraying Leslie Knope and Ron Swanson!!!

NBC calls Making It a "friendly competition" with a focus on the crafting community. Of course, the network also says Amy and Nick will provide encouragement, guidance, and loads of laughs (obvs).

According to Poehler, "the idea came from wanting to totally celebrate the everyday maker. And then it was like, how do I get to hang out with Nick all the time?" To which Offerman added, "I cleverly knew that if I was the actor that knew how to use tools, then I'd be the one Amy would pick whe she made her crafting show. And by God, here we are!"

After learning that a Parks & Rec reboot might actually be happening on Ellen, Nick Offerman and Amy Poehler joke that the only way the show would come back is if Beyoncé were to star as the mayor, clarifying that it is the “Beyoncé Knowles… the singer” that they are intending.

Check out Amy and Nick talking about the hit show Parks and Rec on this episode of Ellen:

(Okay honestly my conspiracy theory is that NBC is playing around with the idea of a “Parks & Rec” reboot and if this new show “Making It” – starring the two main characters of “Parks & Rec” – is a hit… then it’s reboot time! Alright, now back to the story...)

WATCH this SNEAK-PEEK at Season 1 of “Making it.”

Along with Nick and Amy as your hilariously hoisted hosts, they tag team with Dayna Isom Johnson and Simon Doonan as celebrity judges.

Make sure to watch the series premiere of "Making It" July 31st on NBC. Also just mark your calendar for every Tuesday thereafter @ 10/9c. Want to read more on the show Making it? Click here.

Besides starring in “Making It,” Nick Offerman also happens to be in a new movie coming out. (I always knew Ron Swanson had a sweet, soft side!)