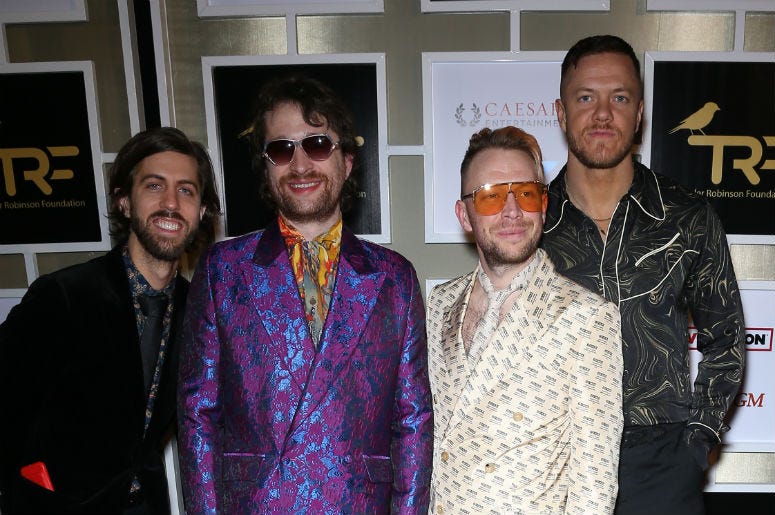 Imagine Dragons performed at their fifth 'Rise Up Gala' September 14 to help fight childhood cancer. The event took place at Caesars Palace in Las Vegas in support of the Tyler Robinson Foundation and was hosted by Joel McHale.

The band announced earlier today via Twitter that they raised more than $2.1 million for kids with cancer and their families. Prior to their live performance, the night was filled with a VIP reception, red carpet, silent auction, and more.

our 5th @trfdotorg Gala raised $2.1 million for kids with cancer and their families. we couldn't have done it without all of you. huge huge thanks to @joelmchale, @truTVjokers, @goldenknights, @crissangel and too many others to name who made it a night we won't ever forget. pic.twitter.com/6U4pUtYxhh

Aside from the "Natural" band mates, the cast of truTV's Impractical Jokers, Criss Angel, and the Las Vegas Golden Knights were also in attendance. The foundation came together after a fan of Imagine Dragons named Tyler Robinson was diagnosed with Rhabdomyoscarcoma.

According to Billboard, "The band grew close to Robinson and after he passed away they made a point to attend and perform at the gala every year, making sure to always play "It's Time" in Robinson's honor."

Watch Imagine Dragons perform "It's Time" at the 2018 Tyler Robinson Foundation Gala below.