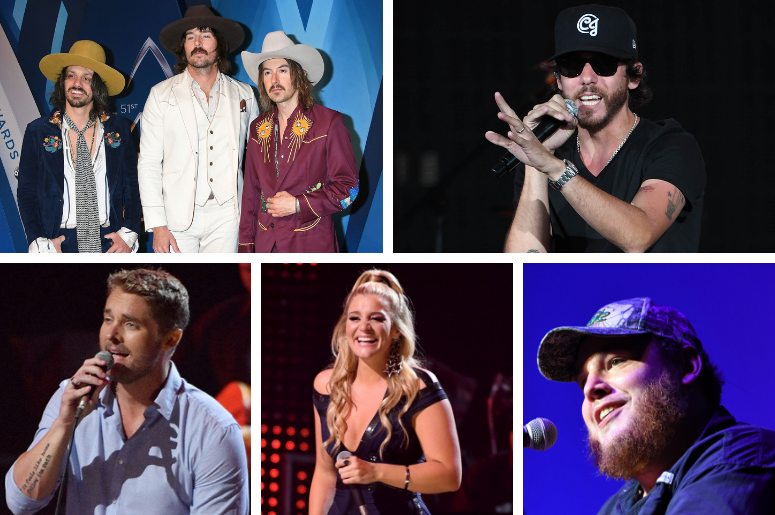 Country Music's Biggest Night is quickly approaching and we want to hear from you. Every year there's a group of select artists nominated and categorized as new.

Lauren Alaina, Luke Combs, Chris Janson, Brett Young, and Midland have been nominated for 'New Artist of the Year' at the upcoming 2018 CMA Awards. Ahead of the ceremony November 14, check out our recap and let us know who you want to win by voting below.

Lauren Alaina has come a long way since her American Idol days and is now one of the most recognized females of the genre. The 23-year-old has released two albums since 2011, Wildflower and Road Less Traveled. Her latest project features her chart-topping singles "Next Boyfriend," "Road Less Traveled," and "Doin' Fine." The singer-songwriter recently unveiled her new single to country radio titled "Ladies In The '90s."

Luke Combs is the definition of a superstar in the making. The country singer released his debut album, This One's For You, in June of 2017 which has since gone platinum. Combs' collection features his No. 1 singles including "Hurricane," "One Number Away," and "When It Rains It Pours." The Sony Music Nashville artist is also nominated for Male Vocalist of the Year.

Everybody has loved Chris Janson since the release of his debut album in 2015. Aside from dropping his sophomore project this year, the esteemed vocalist was also inducted into the Grand Ole Opry. Janson's new single, "Drunk Girl," has also garnered the singer-songwriter a nomination in the Song of The Year category as well.

Brett Young has made quite the splash in the country genre over the last few years. He released his first single, "Sleep Without You," in 2016 and followed up with his debut self-titled album in 2017. The 37-year-old now holds three No. 1 singles to his name including "In Case You Didn't Know," Like I Loved You," and "Mercy." Young will release his personal and highly-anticipated sophomore album, Ticket To L.A., on December 7.

When you listen to Midland, you're going to want something On The Rocks. The country group consisting of Mark Wystrach, Cameron Duddy, and Jess Carson has released some of the most infectious tunes in music. The Texas natives released their first studio album in September of 2017 and has made their mark with tracks such as "Drinkin' Problem," "Make A Little," and "Burn Out." Midland is also nominated in the Vocal Group of the Year and Song of the Year categories this year.

The 2018 CMA Awards will air live from Nashville's Bridgestone Arena November 14 at 8 p.m. ET on ABC.