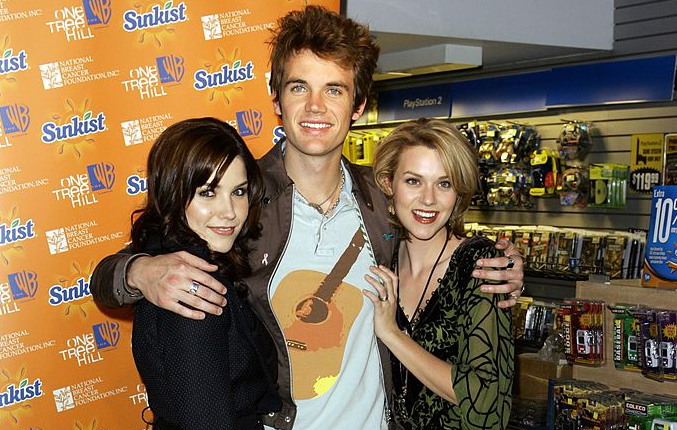 (US99) - The one thing we love most about the One Tree Hill cast members is how much love they have for each other.

Though there isn't an official "One Tree Hill" reboot in the works, that hasn't stopped the cast from reuniting to create some jolly holiday films for the fans.

This year, they're embracing the holiday spirit yet again and coming together for another Lifetime Christmas movie.

Burton took to Twitter back in May, when they were filming the flick, to thank Lifetime for allowing her to "play" with her friends.

Guys. I’m suuuuuuper picky about work. I only wanna play with my friends. So a big “thank ya, kindly” to @lifetimetv for giving me @meganparkithere and @tylerhilton as early Christmas presents this year! We’re making holiday magic in the summer heat, and I could not be more excited about it. Stay tuned for more behind the scenes tomfoolery!#itsawonderfullifetime

In addition to a photo with Park, Burton posted tons of behind-the-scenes photos with her former cast members.

Here's the official synopsis for "The Christmas Wish:"

"Every December, in the small town of Cedar Falls, a wooden box is placed in the town square as a Christmas tradition for people to write their true heart’s desire on a slip of paper and place it in the box, in order to have the wish granted. After a night out together, Maddie (Park) decides to slip in a wish in the box for her sister Faith (Burton) to experience true love for the first time. Faith and Maddie are surprised the next day when she meets the very handsome and eligible Andrew (de la Fuente). At first, Faith thinks that her Christmas wish has come true. But as Christmas nears, Faith begins to wonder if Andrew is really perfect for her, or if her wish is leading her to her best friend, Wyatt (Hilton)."

For Life!!! Love my dude @antwontanner2214 ! Been cracking up together since I was 20 years old. Xoxoxo #itsawonderfullifetime @lifetimetv #xmasmoviecult @dllewis82

Lifetime plans to release 28 new Christmas movies as part of their "It's A Wonderful Lifetime" schedule from October 25 until Christmas day.

No premiere dates have been announced.

This isn't the first time the cast of "One Tree Hill" has reunited for a holiday special.

Bunny!!!! Happy birthday to the gorgeous and talented and NAUGHTY @meganparkithere !!! You are fun personified. Thank you for teaching me all the hip new slang the kids are using these days. You’re the cutest, sis. I love you. Be wild today. Xxxx

In 2019, Hilton and Burton starred in "The Christmas Contract" alongside Tanner, Robert Buckley (Clayton Evans), and Daneel Ackles (Rachel Gatina.)

In fact, Burton and Hilton are like the Lifetime Mr. and Mrs. Claus, as they starred in the 2013 Christmas romance, "Christmas in the Bayou."

It's clear that the cast of "One Tree Hill" enjoys spending time together and loves working with each other even more.

And we're definitely not complaining. We'll take any "One Tree Hill" reunion we can get!