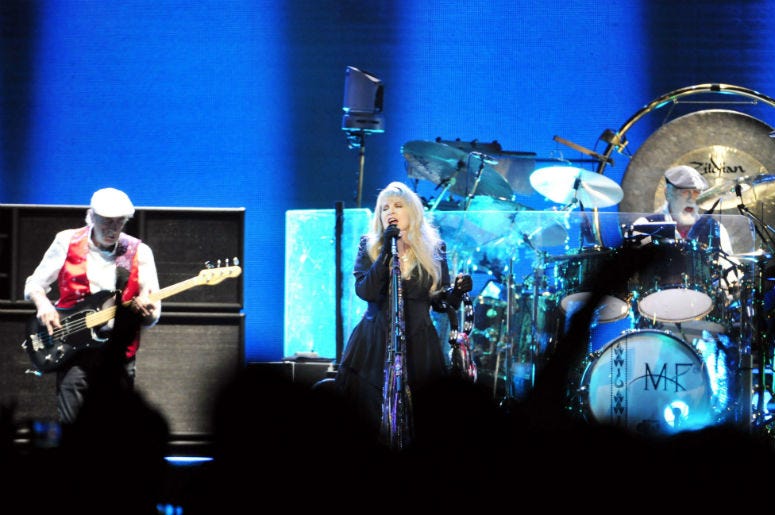 Earlier this month, it was announced that Fleetwood Mac decided to part ways with guitarist Lindsey Buckingham. Now, the group has given its first interview since Buckingham’s departure, marking a new era of Fleetwood Mac.

Make no mistake: The band is hesitant to use the word “fired” in the Rolling Stone interview. Rather, the band cited a scheduling conflict as the reason behind Buckingham’s departure. According to the interview, the band wanted to begin rehearsal for its just-announced massive US trek well before the date Buckingham had in mind. As Mick Fleetwood states, “majority rules,” so they decided they couldn’t wait for Buckingham, and they essentially told him, "You can go your own way."

Instead, the new Fleetwood Mac touring lineup will include Tom Petty and the Heartbreakers’ Mike Campbell and Crowded House’s Neil Finn; both Christine and John McVie separately voiced their amazement at Finns’ and Campbell’s abilities to jive so effortlessly with the band.

In a statement left on Fleetwood Mac’s website, the band shared, “We are thrilled to welcome the musical talents of the caliber of Mike Campbell and Neil Finn into the Mac family. With Mike and Neil, we’ll be performing all the hits that the fans love, plus we’ll be surprising our audiences with some tracks from our historic catalogue of songs.” Which, as Stevie Nicks points out to Rolling Stone, means fans will be treated to more robust setlists that could include songs like 1969’s “Rattlesnake Shake,” 1970’s “Oh Well,” or one of her personal favorites, “Station Man.”

TBD on when the band will begin formal rehearsals in this new, post-Buckingham era, but the group seems confident in its abilities, adding to its website, “Fleetwood Mac has always been a creative evolution. We look forward to honoring that spirit on this upcoming tour.” Plus, for a band that’s had a bit of a flair for the dramatic over its 50-year run, it’s all “business as usual,” says Mick Fleetwood.

As for the tour, that will kick off in October, hitting more than 50 cities through Spring 2019.

Fleetwood Mac are hitting the road on 'An Evening with Fleetwood Mac'. Presales start on 4/30 at 10am local time. Get more info here: https://livemu.sc/FleetwoodMac

Fans who purchase tickets for the upcoming tour won’t have the chance to see the band in its classic lineup, but fear not, Fleetwood Mac purists. ”We know we have something new, yet it’s got the unmistakable Mac sound,” promises Mick Fleetwood on the band’s website.