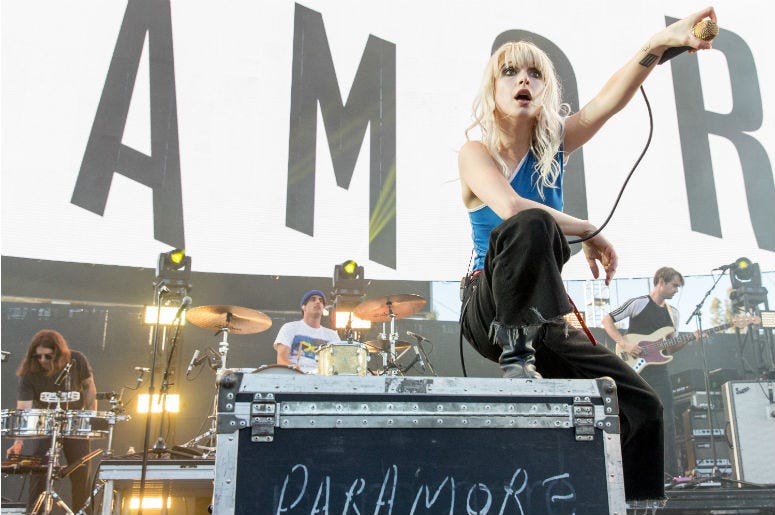 As a nod to the song’s music video, frontwoman Hayley Williams channeled her inner ‘80s news anchor for the performance.

Williams later took to Twitter to explain the Colbert performance as well as the song's meaning. Read on to see the song's emotional ties.

the promotional side of what we do can feel pretty uncomfortable to us. think the colbert set was about us performing in an alternate world that v much looks like our own bubble- and me representing the nervousness of having people poke a hole in the bubble and peer in...

Rose-Colored Boy is a song about feeling pressured to look at the world with blind optimism when you actually feel very hopeless about the world & your part in it. there is so much social pressure to be (or appear to be) “happy” that we can actually feel shame when we aren’t. 1/3 pic.twitter.com/STiu3U44eZ

Thx @colbertlateshow for letting us perform our song on television. We hope that somewhere out there, staring into a screen, someone was made to feel less alone by the ideas in Rose-Colored Boy. 3/3 https://t.co/KYBxSUrR1Q

“Rose Colored Boy” can be found on the band’s 2017 album, After Laugher. You know—that album Elton John called “one of the most underrated albums of last year." If you’re with Elton, you can grab a copy here.

The band will tour in support of the album this summer beginning June 12 in St. Augustine, FL.