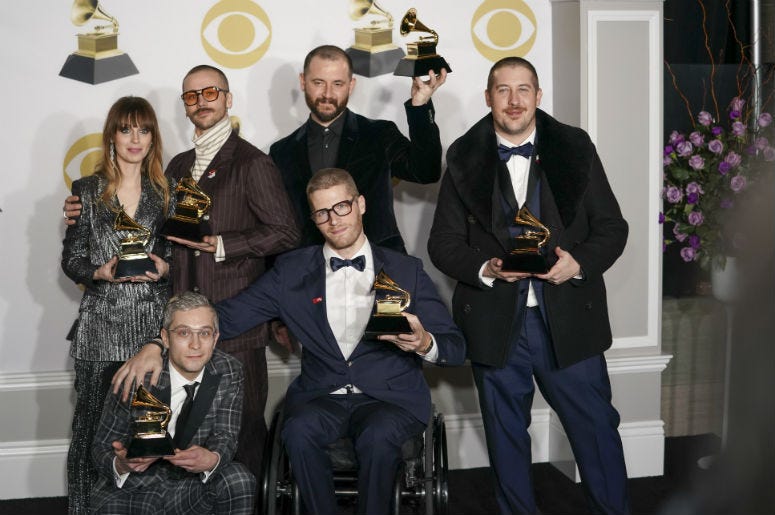 Portugal. The Man are absolutely killin’ the game lately. 2017’s Woodstock continues to blow fans away, with the summer’s mega-hit “Feel It Still” going strong on the charts and “Live In The Moment” currently sitting pretty near the top of those charts. Oh, and there was that little thing called the GRAMMYs.

In honor of the band’s Best Pop Duo/Group Performance win for “Feel It Still,” we sat down with the guys to talk about their GRAMMY—you know, that trophy frontman John Gourley wiped his *ss with. Zach Carothers (bass) and Eric Howk (guitar) told us all about it … and that “Hail Satan!” GRAMMY moment.

“When you’re from those Nordic latitudes, there’s just something about the darkness and the cold that really brings out the metal in you.”

But it wasn’t just Satan they gave a shout-out to. Originally from Alaska, Carothers elaborates on the band’s acceptance speech and its mention of Native Alaskans.

“We kind of feel a responsibility to say something that matters to us for people that don’t get heard a lot.”

Hear more about that—and Howk’s and Carothers’ swanky styles—in our exclusive interview below:

All that’s left to say is this: Howk pulls off post-Fight Club Brad Pitt better than Brad Pitt. And hail Satan.