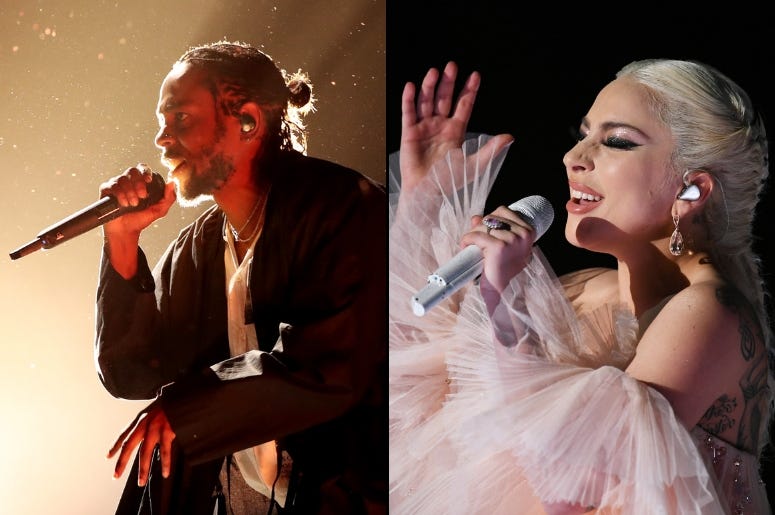 The soundtrack continued a return to glory in 2018.

Some of the biggest albums of the year were tied to the year's biggest films. Soundtracks to Black Panther and A Star is Born helped push the Original Motion Picture Soundtrack back to a level of prominence, after being mostly a space for animation and kid-friendly films for years. Famous curators, box office busting biopics, and music woven into the fabric of the story helped secure a new space for soundtracks and the music of movies. In fact, the best selling album of 2018 belongs to last year's Best Original Song-winning film The Greatest Showman.

Now comes the time to see how massive success translates into award show season. Songs from both Lady Gaga and Kendrick Lamar received nominations on Tuesday morning for Best Original Song at the 91st Annual Academy Awards. One was the centerpiece of the movie's love story, the other an extension of a universe created and the cultural impact it reflects, "Shallow" from A Star Is Born and "All The Stars" from Black Panther will forever be touchstones of 2018, but how will they fare when Hollywood is the judge?

They have some stiff competition, mostly likely from Diane Warren. The songwriter is nominated for the 10th time at the Oscars. She lost her previous nine nominations with artists like Aerosmith, LeAnn Rimes, and even Lady Gaga. Her song from "I'll Fight" from RBG is performed by the showstopping Jennifer Hudson.

Also nominated this year is "The Place Where Lost Things Go", performed by Emily Blunt in Mary Poppins Returns, and "When a Cowboy Trades His Spurs for Wings" from the Netflix film The Ballad of Buster Scruggs.

We'll have to wait until February 24th to see who wins, but in the meantime let us know what you think. Who should win Best Original Song at the 2019 Oscars?