There were many challengers over the weekend, but the Coachella crown belonged to Ariana Grande.

The thank u, next singer made the most of her headlining slot on Sunday, performing with 4/5ths of *NSYNC, staging a sing-along with Diddy and Mase, and overcoming sound issues with frequent collaborator Nicki Minaj. All the while, Grande served up hits from her two number one albums from the past year, complete with dazzling choreography and an affecting orchestra. The late night set thrilled attendees and livestream viewers who dubbed the event "Arichella", as anticipation is already high for what she'll do on weekend two. 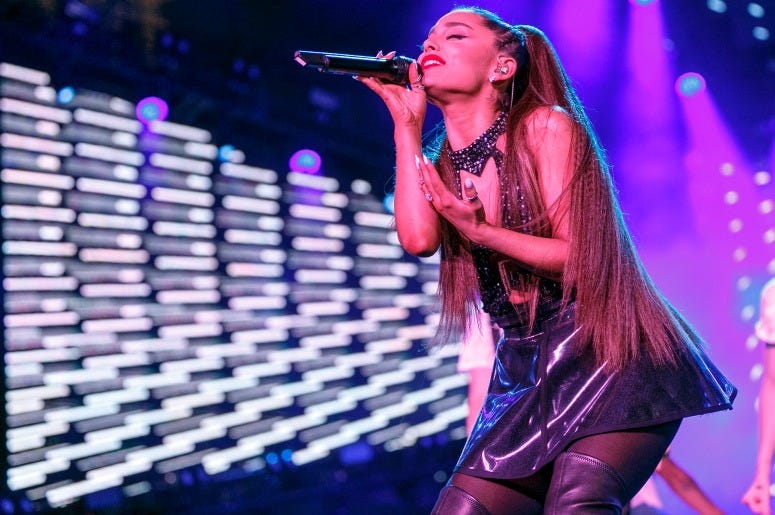 Is Ariana Grande Planning a "Thank U, Next" Body Lotion?

Thanks @arianagrande for having us ... was a great time and a chance to perform with my brothers once again ! #arianagrande #cochella2019

The *NSYNC link comes courtesy of a sample in "break up with your girlfriend, i'm bored." Grande performed the song which features a melody from the group's No Strings Attached song "It Makes Me Ill" before 4 of the 5 members of the boy band  joined her on stage. Together they performed "Tearin' Up My Heart" with Ariana filling in for Justin Timberlake. Alongside Lance Bass, JC Chasez, Joey Fatone and Chris Kirkpatrick, Grande grooved through the 1997 classic and set off the Coachella crowd.

Later Grande would be joined by Nicki Minaj, who suffered through sound issues in an attempt to perform their collaborations "Side To Side" and "Bang Bang." It ended up looking more like a late night karaoke session than a main stage event, but they made it through with smiles and support.

The set would get another 90's vibe injection later when Diddy and Mase would come to the stage for "Mo Money Mo Problems." The three used it as an opprotunity to honor members of the Hip Hop community that we've lost, including Nispey Hussle and Mac Miller.

what a magical night! i am BEYOND PROUD of my little sister for her performance at #coachella! she sung her heart out! hitting notes i have never heard her hit and performing with a passion so strong it was felt miles away... 🖤 https://t.co/GGifHvNsiL #ARICHELLA pic.twitter.com/WCiQhD6Mhc

You can find the full setlist from Ariana Grande's performance at Coachella below. Grande returns to the desert for weekend two on April 21st.

"Break Up With Your Girlfriend, I'm Bored"

"Side to Side" (with Nicki Minaj)

"Right There" / "Break Your Heart Right Back"

"The Light Is Coming"

"No Tears Left to Cry"