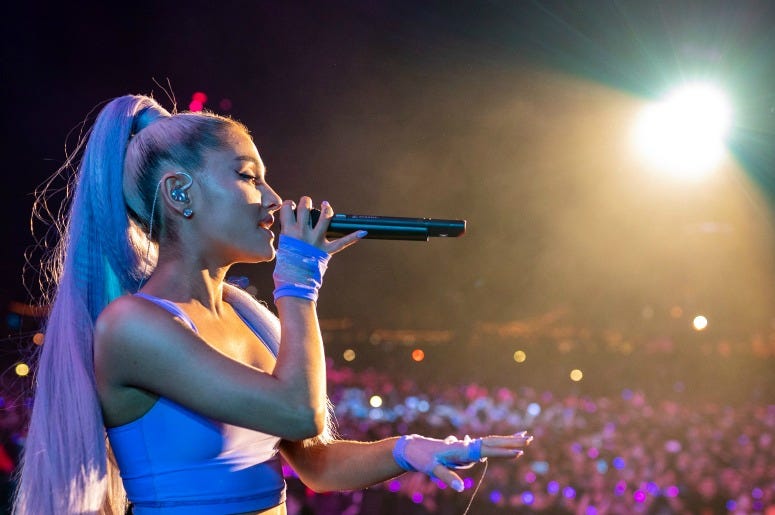 After a few weeks away out of the spotlight, Ariana Grande has been shining as bright as ever.

First the Sweetener singer returned to the stage during a TV special celebrating Wicked, then we saw her previously-taped Escape Room adventure with James Corden, all while scrambling to get our tickets lined up to her just announced world tour. Maybe the best way to get over a breakup is to stay busy?

Whatever the motivation, we're here for all the Ariana she's willing to hand out.

The latest in a string of performances comes courtesy of BBC One, who debuted their Ariana Grande at the BBC special on Thursday night featuring Grande performing some of her Sweetener songs with an all-female orchestra and choir.

Grande taped this special on September 7th, the same day in which ex-boyfriend Mac Miller passed away. It's understood that she did not know the news until after the taping.

Ariana does talk with host Davina McCall though about mental health, her anxiety issues, and the importance of talking with others. "You have ups and downs, and sometimes you'll go weeks at a time where you'll be like crushing it, and then there'll be no anxiety, like you're fine. And then something will happen that can trigger it and then you'll have, like a couple of down days."

"It feels so silly because I feel like the luckiest, most blessed girl in the world, so I almost feel guilty that I have it" Grande continued. "But yeah, it's just in your head, and that's just so crazy how powerful it is. No matter how good things are, it just can totally change everything."

"Remember you're not alone. Talk to loved ones, reach out to people."@ArianaGrande on living with anxiety. pic.twitter.com/YuDOdhrgb8

Grande has had a lot to deal with since the taping of the BBC special, learning of Miller's death and struggling through a high-profile breakup with comedian Pete Davidson. What was thought to be an amicable split, seems to be open to new speculation after a series of since-deleted tweets from Thursday.

In a promo for this weekend's episode of SNL, Davidson jokingly asks musical guest Maggie Rogers to marry him. It's an offer she quickly turns down, to which Davidson responds, "0 for 3."

In response to the promo, Grande tweeted "For somebody who claims to hate relevancy u sure love clinging to it huh. thank u. next."

Those tweets have since been deleted.