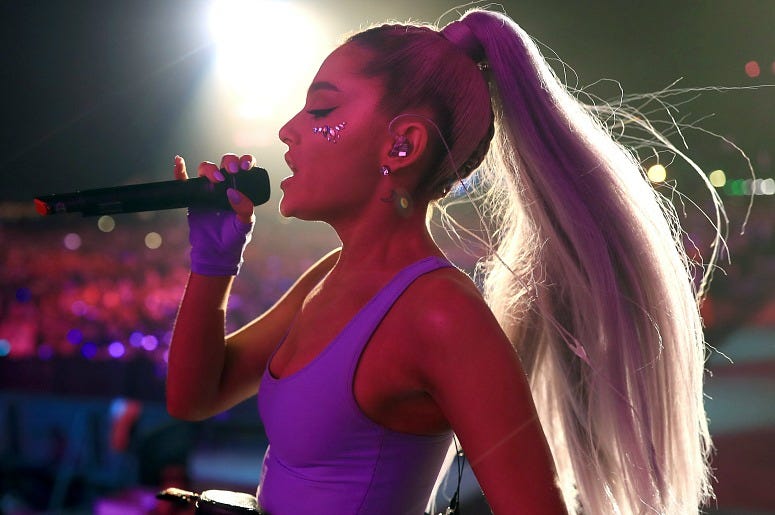 Ariana Grande is in a new relationship with herself, and we are all feeling the affects.

The "God is a woman" singer released a surprise new song on Saturday night, addressing her exes and talking about finding peace and patience with herself. Grande's "thank u, next" is an empowering piece of pop, and an important moment in music. She has handled the past year with grace, and it is exciting to see her emerge in such a strong way. Plus, it's a bop.

The moment has caused a few familiar faces to respond to Grande, the first being Pete Davidson.

Much was made about the song being released a half hour before the airing of Saturday Night Live, and Davidson addressed the still-fresh breakup during his segment on Weekend Update. "I know some of you are curious about the breakup" said Davidson. "The truth is, it’s nobody’s business and sometimes things just don’t work out and that’s okay. She’s a wonderful, strong person, and I genuinely wish her all the happiness in the world.”

The song also prompted an adorable interaction between Grande and "Havana" hit-maker Camila Cabello, as Ariana shared the real pain of the high ponytail.

well u actually have hair so that prolly makes it a lil more painful ..... nah jk i’m in constant pain always and don’t care at all

As long as we're living for 5H friendships, we should mention that Ariana has announced the support for her upcoming Sweetener tour which kicks off in March 2019. Normani will be joining the singer for the three-month trek celebrating her latest album, and maybe even a new one by then. You can find the full list of dates here.

excited to announce that #sweetenerworldtour w special guests, the beautiful and talented @normani & my dear friends (and ty next producers) @socialhousetc ... tix are on sale now .....🖤 https://t.co/EeN082IpEO pic.twitter.com/kQEsVhoUcQ

excited would be an absolute understatement. I’m feeling special right now because I get to spend three months on tour with @arianagrande 💕 the sweetest of angels. THANK YOU! See y’all soon. pic.twitter.com/Jj4dT1wfDO