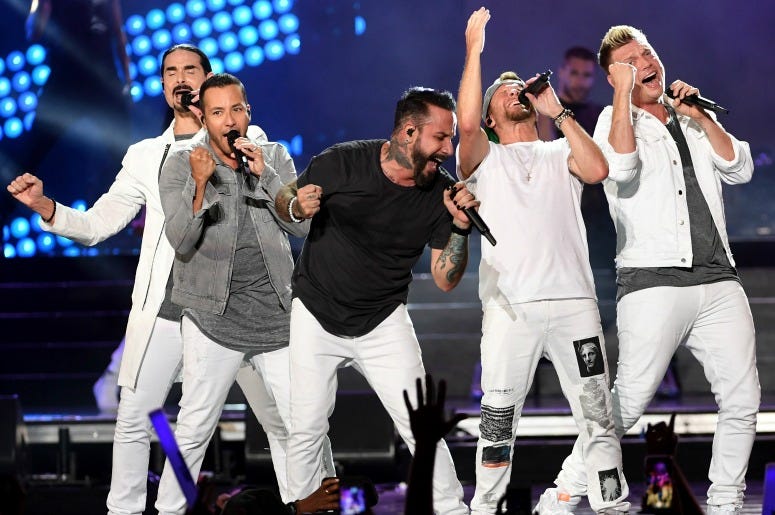 There is something decidedly different about the Backstreet Boys on DNA.

The hallmarks are all still there. The effortless harmonies blended to perfection and the playful sexuality, even the wounded love lyrics flow like they did two decades ago. But over all of it is a fresh coat of maturity and well-earned experience that radiates for the group that has been together for 25 years strong. The Boys are mostly now firmly in their forties, and the youthful smirk of their first successes has completely transformed into confident conviction. DNA is grown man music from five gentlemen who have once again found their groove.

Our brand new album, DNA, is now available everywhere! BSB is in our DNA, just like it’s in all of yours. We have been a group for more than 25 years and this is our favorite album… ever. Listen, watch, share #BSBDNA 🖤 https://t.co/VDPT1Nv7nc pic.twitter.com/STVfBtUlmC

It starts in the studio. Instead of the of-the-moment music trends they may have chased in the middle part of their career, DNA opts for classic R&B arrangements and heartfelt ballads.It happens under the experienced hand of writers and producers like James Newman, Andy Grammer, and Ryan Tedder, who specialize in affecting adult pop music. What has emerged is an evolved Backstreet Boys, who feel comfortable and fresh.

While the entire album feels like a giant sonic step forward, there are a few examples that stand out to show their growth on DNA. On "Passionate" the Boys ride a rubber bassline and coalesce in the chorus with precision. The song is dotted with horns and vocal runs, fluctuating from tight, perfect pop to an open space for their voices to explore. Elsewhere the group shows off in synchronized style on "Chateau" with a timeless track, and croon through "The Way It Was" in a masterful moment from another era. As they have boiled things down to basics, the Backstreet Boys sound bigger and more emotive than ever.

It is really an amazing accomplishment, for the world's best-selling boy band of all time to embark on a world tour and a new chapter after 25 years with their most complete album, maybe ever. DNA is now available everywhere.