Beyoncé's Coachella performance is at the center of Homecoming: A Film by Beyoncé, but along the way we get a glimpse inside the Knowles-Carter family as well.

In Homecoming we learn that her twins came as a surprise and derailed her first planned appearance at Coachella, setting the historic performance back a year. “I was supposed to do Coachella the year prior but I got pregnant unexpectedly” Beyoncé remembers in the film. “It ended up being twins which was even more of a surprise.” 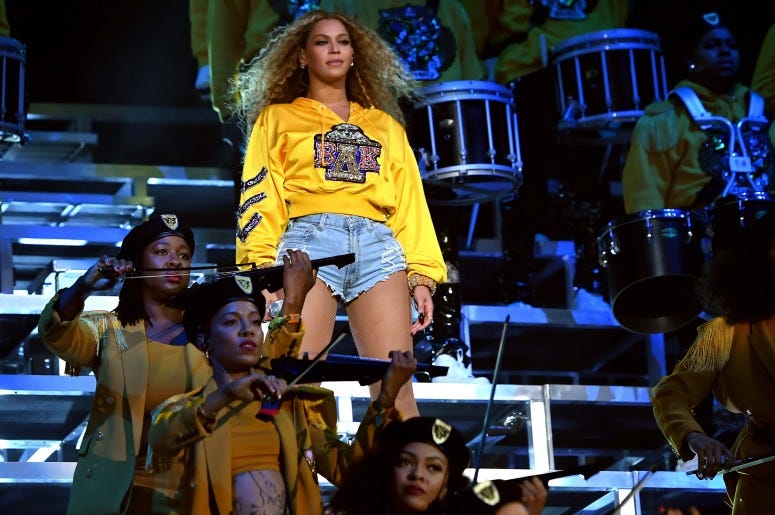 “My body went through more than I knew it could” explains the "Formation" singer about the birth of her twins in 2017. Beyoncé reveals that the pregnancy was a difficult one, as she developed preeclampsia while carrying Rumi and Sir. "I was 218 pounds the day I gave birth" she says. "I had an extremely difficult pregnancy. I had high blood pressure. I developed toxemia, preeclampsia."

The twins arrived in June of 2017, and Beyoncé would take the Coachella stage the following April.

Also arriving Wednesday morning is the soundtrack to the film, HOMECOMING: THE LIVE ALBUM.  Featuring guest performances from Destiny's Child, Jay-Z, and J Balvin, Homecoming manages to capture the glory of the film and includes an added guest star. Bey's daughter Blue Ivy takes the spotlight for an a capella version of "Lift Every Voice And Sing", and fans are ready to crown her the next legend in the family.

😭 listening to Blue Ivy signing on #BeyoncéHomecoming album she is clearly a young star in the making! pic.twitter.com/48yJaX1aWQ

Blue Ivy is going to be something else. The seeds are planted

Wow baby #BlueIvy is not just singing #LiftEvryVoice on key, she's imitating her mama's runs. Give baby a decade, it's over for you other girls! #Homecoming pic.twitter.com/k3dTOZ96Ps