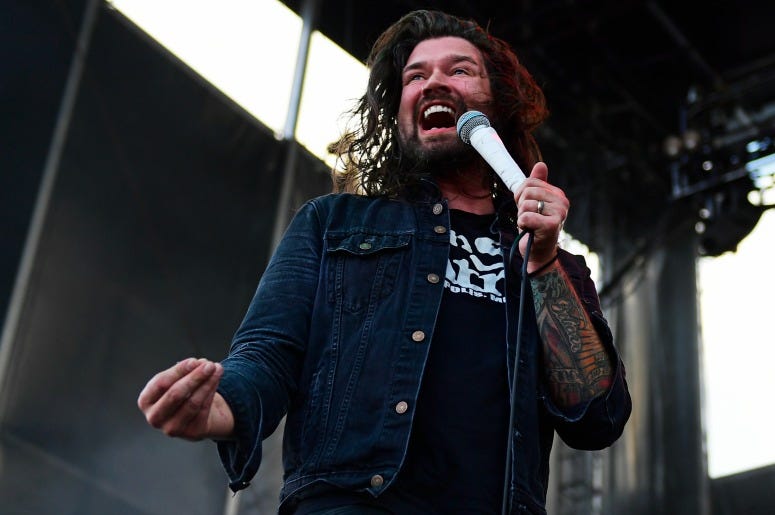 Taking Back Sunday took their twentieth anniversary party to the 25th Vans Warped Tour this weekend in Atlantic City, NJ. Together they honored two impressive legacies for a celebration almost too big for the beach.

"We're just catching up with a lot folks we haven't seen in a long time, and just having a good time" singer Adam Lazzara explained modestly before the show.

The band marks two decades this year since their creation, and before they took the stage they paused to look back at some of their earliest moments. "The one thing we've been reminiscing about a lot is a show we played in the early days in Long Island" remembers guitarist John Nolan. "We had just done the demo, called the 'Tell All Your Friends' demo."

"Because we were so clever" adds Adam. "And we hoped people would tell all their friends, so why not call it that."

"We had been playing shows on Long Island, and selling this demo for probably a month or so" continues Nolan. "We did this one show at this bar that would have all ages Sunday afternoon shows, and it was one of the first times where there was more people that we didn't know than people we did know, cause a lot of fans at that time were friends and maybe friends of friends. So there was a lot of people we didn't know and then, everybody was singing along to the songs and like, going crazy and just really losing it and singing back to us. It was the first time we'd gotten that response and it blew our minds at the time."

"That was a small moment, but in a certain way it was like the first realization that something big is happening here. Something is going on. This is turning into something much bigger than we expected."

In the nearly two decades since, the band has grown and evolved, withstood time and changes to be one of the most successful to break out of that scene. With a handful of top ten albums, the friends kept telling friends and inviting more people to the party.

Across it all, Taking Back Sunday has dipped in and out of the history of the Vans Warped Tour, which is celebrating its 25th anniversary this summer with two giant shows on the coasts. The first took place this past weekend in Atlantic City, with a West Coast party planned for July 20th and 21st in Mountain View, California.

Warped Tour gain a reputation as a punk rock summer camp over the years, and as the show marks 25 years, Nolan and Lazzara remember some of their favorite behind the buses moments.

"Remember the one Warped Tour where Bayside would do the bar at the cookout?" Adam recalls to John. "Every year a different band kind of takes on the responsibility of setting up a little bar after the shows at the cookouts" he remembers. "One of the years we did it, Bayside was running the bar. Which worked out great for us cause they're some of our best friends. So we got to skip the line."

With Warped now in the rear view, the band is fully focused on their own anniversary, with a full tour planned for this year and maybe more. "We've been asked that question and I never know how to answer it because I don't think any of us know where it's going until we get in a room together" Adam says of new music, after releasing two new songs on their Twenty album earlier this year. "That's just where our heads were at the time."

For more from Taking Back Sunday, check out the full interview above. You can find their full list of upcoming tour dates here, and details about the 25th anniversary of the Vans Warped Tour here.