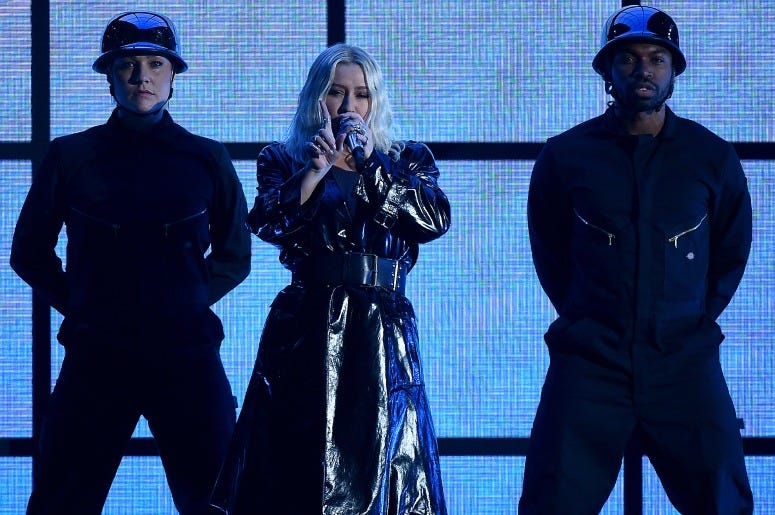 Just last month Christina Aguilera was talking about “being hurt” by the rivalry between herself and Britney Spears.

For a cover story conversation with Cosmopolitan, the “Beautiful” singer detailed the repercussions felt from comparisons between the two. “It’s hard to hear yourself being called names” said Christina. “I remember being hurt by these commercials on MTV, pitting Britney as the good girl and me as the bad girl. It’s like, if I’m going to be demure and innocent, that’s okay. But if I’m going to just be myself, I’m trouble.”

It seems the two will forever be linked, the “Genie In A Bottle” and the “…Baby One More Time” schoolgirl, frozen in TRL time for eternity. As the rivalry for pop supremacy played out as the century turned, it seems it never really existed in the mind of Aguilera.

Xtina stopped by Jimmy Kimmel Live on Thursday night, and explained that the rivalry probably would have been squashed if social media existed to tell the story.

“Back then it was just like, the media was the storyteller for you” Aguilera told Kimmel. “Rather than being like, this is what it is, here’s a picture of us right here and now, hanging out.”

“There was a Britney – Christina, considered rivalry thing and if we had social media back then we would have probably done a song together or something and just like squashed it.”

Jimmy Kimmel reminds Christina that it’s not too late for the two to work together and attempts to make the connection. “If her reps say ok” she responded. “It’s probably not too late Britney” she smiled.

Christina is getting ready for her Liberation Tour that kicks off later this month. You can find the full list of shows here.