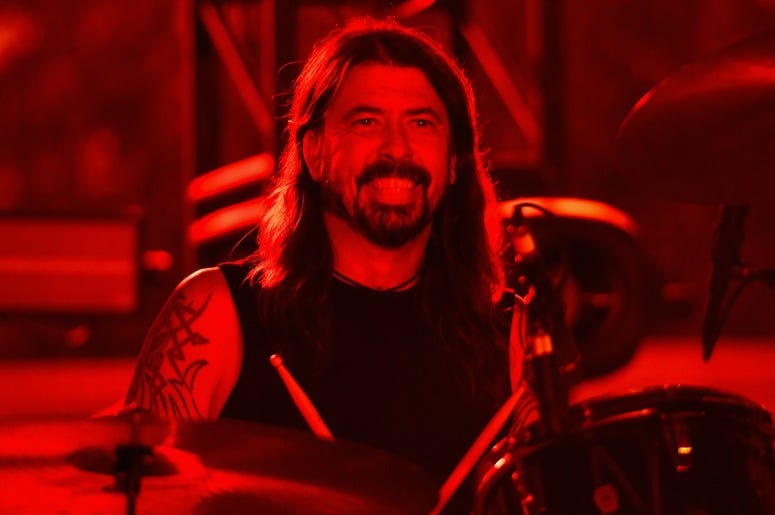 We're used to Dave Grohl being the best guy. The Foo Fighters frontman seems to fill his day with good deeds and general awesomeness, cooking BBQ for firefighters, inviting young fans on stage, auctioning off his stuff for charity, or even just leaving a generous tip. That's only in the last two months.

The "Best Of You" singer is a constant force for good, but on Tuesday night he painted himself red to portray the ultimate evil, because you know, general awesomeness.

Grohl appeared alongside God, played by Billy Crystal, for a segment on a satanic statue with Jimmy Kimmel Live!

The Snaketivity sculpture from the Church Of Satan is on display in the state capital of Illinois after the organization exercised their first amendment rights. With that, Jimmy Kimmel decided to check in with God to see if he thought the statue should be removed. "I'm fine with it, me and Satan, we're cool" he explains. "We made up. Hey listen folks, if Taylor Swift and Katy Perry can make up why can't we?"

At that point Grohl enters as Satan, dressed in red with a guitar in hand, flicking his tongue furiously. "We get together once a week, play a little Fortnite, you know, fantasy football" explains Crystal. "Then we have brunch."

The two go on to play rock paper scissors to decide a famous fate, and discuss their Christmas plans, or has Crystal puts it, "It's my kid's birthday." You can watch the whole thing below.