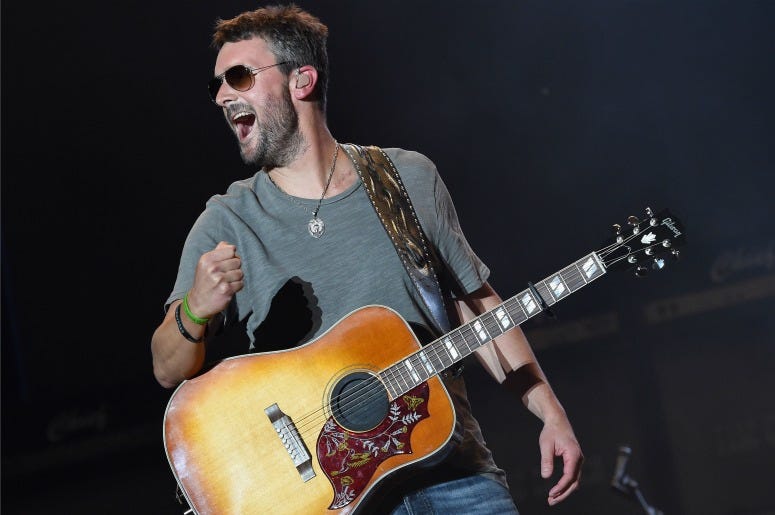 There are a lot of personal, important moments on Eric Church's sixth studio album Desperate Man. Chief digs deep on faith, family, and his feelings after the tragedy in Las Vegas. He remains forever changed by the events that unfolded, and has spoken up about it several times in the year since. One of his most powerful moments though comes via his song "Monsters" which is featured on the new album.

"I think Monsters too, after Vegas became, just more real to me" Church explains in a new Instagram video. The song which compares the metaphorical monsters under the bed to the real ones capable of amazing evil, shows that faith and prayer can be the light out of the darkness.

The Mr. Misunderstood singer explains that the seed of the song started at home. "I can remember going in my oldest son Boone's room, and his closet light or one of the bathroom lights - the dimmer wasn't right, it wasn't bright enough and he wanted it brighter" he explains. "When I went in and made it a little brighter he goes 'that's good, that's perfect'. And it wasn't much, but that stuck with me. This was pre-writing the song, but that stuck with me that all he needed was just more light."

“It will always be a song that I think about where I was at that time in my life, where my kids were, and just how that little bit of light is what made the difference.” Hear Eric talk about writing the song “Monsters” now.

For Church, the writing of "Monsters" happened fast, "the way songs are suppose to happen when they're that kind of song" he says. "It will always be a song that I think about where I was at that time in my life, where my kids were, and just how that little bit of light is what made the difference.”

Eric Church hits the road in January for his Double Down Tour, playing two unique shows in one venue, one city at a time. You can find all the dates here. Desperate Man is now available everywhere.