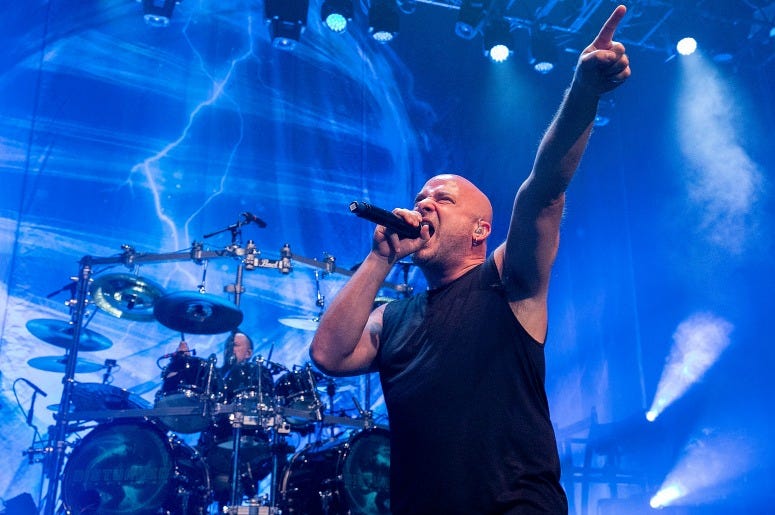 On the surface it might seem like the same Disturbed, but inside is a band that is taking chances and expanding their sound like never before.

"It is far and away, the most diverse Disturbed record to date" explains singer David Draiman. "It takes people on a bunch of curves and turns that they certianly would not expect."

Evolution is more than an album title, it has become a mission statement for the band nearing two decades of rock. It's a challenge for growth, and a sonic accomplishment born out of influences and the events that have surround Draiman and company. The foundation is the same, the hard-charging muscular melodies that have earned them number one albums for the past fifteen years, but built upon it is a new style with more mature flourishes than ever before.

When we sat down with the band, they told about the addition of more acoustic elements that open up their trademark sound. Buoyed by the success of their cover of "The Sound Of Silence", the band has found a way to impact in an all new way and hit just as hard with softer strokes. "This time out we prioritized the acoustics" says Draiman. "They came together so convincingly and so powerfully that they lent themselves to the whole idea that we had had in our mind to begin with, of creating a classic rock vibed record."

It's partly an addition to their music that was wanted, and partly one that was insisted on by their current climate. The passing of friends Chester Bennington of Linkin Park and Vinnie Paul of Pantera forced a feeling and a conversation. It's a darker album that is addressing real darkness, working with the themes of death, mental illness, and substance abuse.

With all the addition on the album there is one subtraction, from the cover. "The guy is not present on the cover of the record, but he is present inside the record" David says of the band's trademark cover art star. "We wanted to make a distinction between this record and the previous material because there is an evolution. But we also wanted to show that we are by no means divorcing ourselves from our origins and our past."

Evolution is true to its name in every sense of the word, and a huge step forward for a band that was already standing at number one. It is out now everywhere.