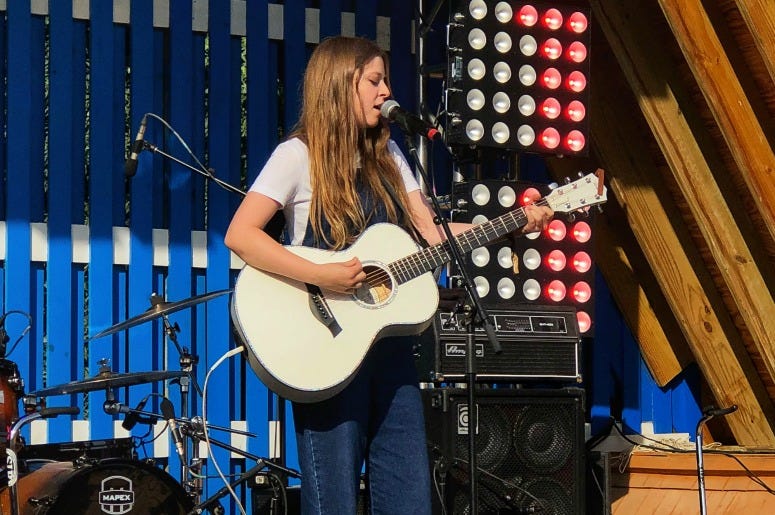 As the sun beat down last weekend on Firefly Music Festival in Dover, DE, Jade Bird looked a bit overdressed in her long dark denim overalls.

"I don't really like the sun and stuff. You know what I mean? I'm a bit British so I tend to come out as if" she laughs. "I've got this long denim dungaree thing going on."

There's comfort in the juxtaposition for Jade. Today it's the long pants in the hot sun, sometimes it's her laid-back persona between yearning heartfelt songs, but mostly it's her mastery of Americana that originated in England.

"I think it's authenticity" says Bird. "I think that's why people always get a radar on for foreign acts doing Americana music, but I kind of just fell into it quite naturally I think because the focus is songwriting, and that's something I'm really passionate about."

"I guess that's why my music kinda goes along them lines."

Early influences of Bob Dylan and Neil Young helped shaped the young songwriter that would eventually craft the Something American EP which was released last summer. The highlight for many has been her love luck tune "Lottery" which has taken hold on radio in the months since.

"I wrote Lottery in Upstate New York where I did the last EP. I obviously write all my stuff by myself" remembers Bird. "The story behind the song is kind of in the verses. It tracks through this relationship I had with an ex, this conversation in a blues bar, which is one of the lyrics is number four Ferdinand Street."

"It's very brutal if you listen to the lyrics you hear exactly what the conversation was and the chorus just kind of came out of nowhere really. I wrote it quite purely so to speak."

The idea that "Lottery" and her songs have taken hold is still amazing to the twenty-year-old singer.

"I can't explain it. I've been playing for a really long time, since I was about fourteen and grafting and grafting for not such a big reward. Having moments like that just mean so much more to me. I genuinely am so humbled by it."

Listen to the entire interview below: