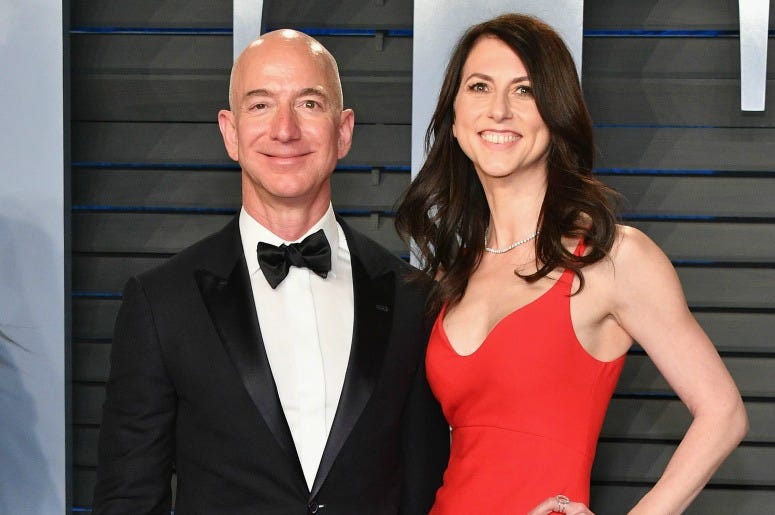 This is so sad, Alexa play "Despacito."

News broke Wednesday morning that Amazon Founder and President Jeff Bezos and his wife MacKenzie Bezos have decided to divorce. In a statement released by the couple, they explain "after a long period of loving exploration and trial separation, we have decided to divorce and continue our shared lives as friends."

"We've had such a great life together as a married couple, and we also see wonderful futures ahead, as parents, friends, partners in ventures and projects, and as individuals pursuing ventures and adventures."

With Jeff Bezos being the richest person on the planet, it's that line about "partners in ventures and projects" that has many people curious. With a net worth of $137 billion, a divorce could prove very costly. The laws in Washington where the Bezos live say that all assets that the couple accumulates over the course of the marriage will be split. With Amazon starting out of the couple's garage after being married and moving to Seattle, this could be a divorce bill of epic proportions.

Little is known about what exists behind the scenes as far as arrangements, prenuptial agreements, or plans for the future are concerned. Even if asked to split the shares they have in the company, the Bezos would still be the majority owners in Amazon.

In addition to the company, the couple is the 28th largest land owner in the country according to Business Insider, with properties in 5 states. Long story short, there's a lot to sort out.

Most importantly though, the couple has four children and from the sound of it seem to be continuing a healthy relationship with each other. "Though the labels might be different, we remain a family, and we remain cherished friends."