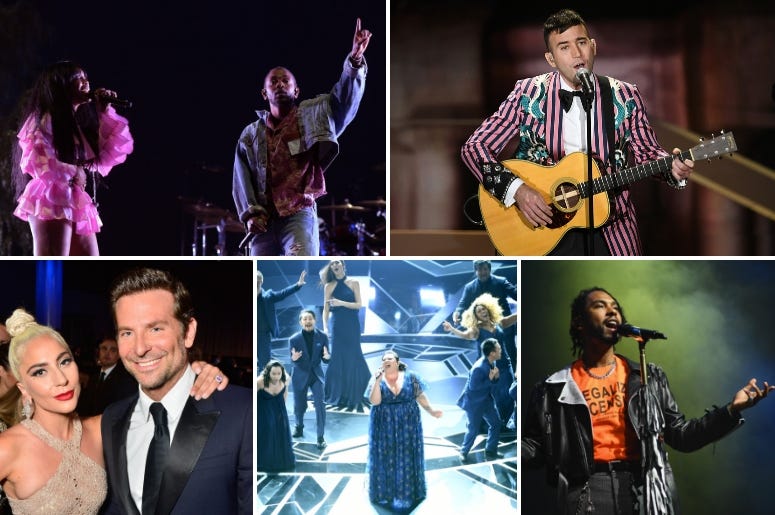 Best Song Written For Visual Media is a cumbersome title for one of the most exciting categories at the 61st Annual GRAMMY Awards. Five the biggest songs from the world of film compete on music's biggest night, each existing to serve a story and also thrill fans outside of the theater. These tunes are well tested already, with three already having been nominated for Academy Awards and two likely getting nods before the end of the month.

While the category is available to songs from all visual media including television and video games, there's no denying the critical acclaim that has already been heaped upon these songs. It's an award aimed at the songwriters, celebrating their accomplishments and honoring their achievement in a year that saw soundtracks return to glory. These are the nominees for Best Song Written For Visual Media.

"All The Stars" finds inspiration in the lessons and spirit of Black Panther, but extends an arm outside of the universe. As the film created a cultural ripple, so did the soundtrack and "All The Stars" with Lamar drilling down lyrically and SZA providing the soulful center.

Haunting and tender, "Mystery Of Love" represents the love and longing of Call Me By Your Name. Stevens serves as an "emotional narrator", speaking to the spirituality of love and looking through the eyes of the character.

"Remember Me" won the award for Best Original Song at the 90th Academy Awards, and serves as reminder of the power of music. In any language, the song shows the bond of music through life and death, and the role it will forever play in our memories.

This classic Country song showcases the soaring skills of Lady Gaga, and surprisingly the compassionate crooning of Bradley Cooper. Like so much of A Star Is Born, "Shallow" shows the emotional depth in the deep end of relationships, leaping into the unknown and taking a chance.

The Greatest Showman soundtrack was the best-selling album of 2018, partly because of this empowering fight song. A champion for the outcasts and a celebration of the differences between us, "This Is Me" is a big song with an even bigger message.