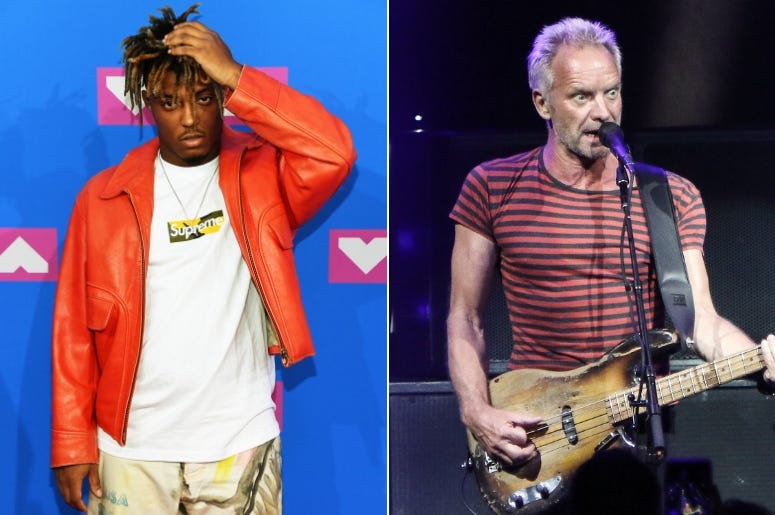 We might not have ever met Juice WRLD if it weren't for Sting.

It's a sample of a 1993 song from the Rock N' Roll Hall of Fame inductee that serves as the backbone of the nineteen-year-old singer's hit "Lucid Dreams." The song which grew all summer, hit number one earlier this month on the Billboard Rhythmic Chart, thanks in part to a plucky guitar line that first appeared on Sting's album Ten Summoner's Tales.

Taken from the song "Shape Of My Heart", the sample has actually become a hip hop favorite, making an appearance in "The Message" from Nas in 1996, and on "Break You Off" from The Roots in 2002. However, it's Juice WRLD that has done the most with the sample, and Sting is thankful for the royalties.

He told Billboard that the money from the song will, "put my grandkids through college" saying that the song is a "beautiful interpretation that is faithful to the original song’s form."

Amazingly, this is Sting's second trip to the top of the Rhythmic Chart, with his "Every Breath You Take" being used as part of Puff Daddy's "I'll Be Missing You" in 1997.

The two haven't met yet, but Sting has been performing "Lucid Dreams" as part of his set during his tour with Shaggy. “We wish him well. I’m sure we’ll meet up down the road.”

Take a listen to both to see where it all began.