There was no Nicki Minaj or *NSYNC during weekend two for Ariana Grande, but the "7 rings" singer had another trick up her sleeve for her headlining spot at Coachella on Sunday night.

“I wasn’t going to bring out any guests tonight” Grande announced as her performance neared its end. “But my friend Justin Bieber came all the way out.” 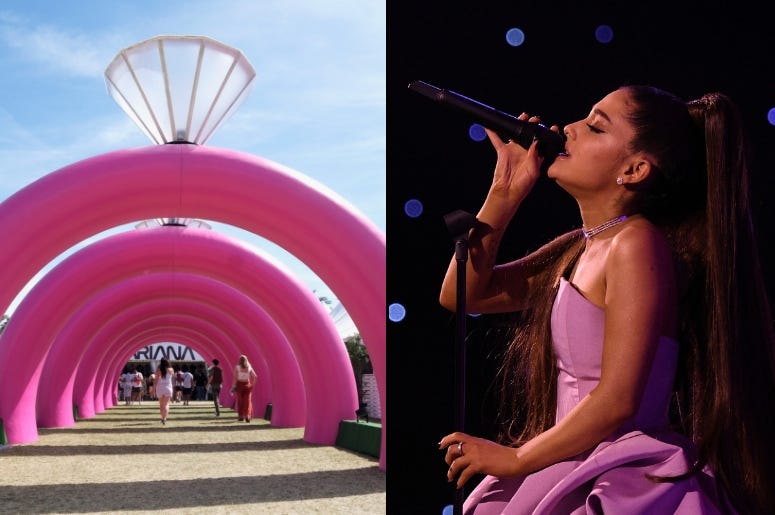 Ariana Grande Brings out *NSYNC, Diddy, and Nicki Minaj to Own Coachella

Justin Bieber spent weekend one at the music festival in the crowd enjoying Ariana as a fan, making dreams come true by meeting Billie Eilish beside the stage. However for her second set in the desert, Bieber stepped out of the audience and back into the spotlight, performing for the first time in 2 years.

Bieber was the lone guest for Grande during the second weekend of Coachella, after featuring a 4/5ths reunion of *NSYNC, frequent collaborator Nicki Minaj, and Diddy during her first set a week prior.

After an eruption from the crowd, Bieber made a slow exit from the back of the stage, thanking Grande, encouraging more noise from the audience, and offering one last tantalizing tidbit over the mic. "Album coming soon” he announced before disappearing from view.

Although brief, Bieber is a part of new music. Alongside Ariana, Halsey, and a massive list of other artists, Bieber plays a Baboon in Lil Dicky's "Earth" song and video, released on Friday. You can check out a behind-the-scenes look at "Earth" below.