"You put good out there and good comes back" remarks James Hetfield on Helping Hands…Live & Acoustic at The Masonic. "We're blessed to be up here and doing this thing. My brother's here and he says 'you know, mom would be very proud.' And I agree, very much."

It's a special moment for Metallica, who at the time were in the middle of raising 1.3 million dollars for their All Within My Hands Foundation. An auction and this fundraising concert at The Masonic in San Francisco helped the band do a lot of good, and now it's available for everyone to hear.

Beyond being for a good cause, it's a fascinating listen. For the most successful heavy band in history to boil down thrash classics like "Disposable Heroes" and "The Four Horsemen" to their most basic sonic skeleton is instructive and astounding. Without the aid of that thumping adrenaline that the band gives off at full scale, these Metallica songs shine with jangly blues arrangements and soulful simplicity. Hetfield's voice is rich and dynamic, embodying the emotions that usually gets an assist from those blazing guitars.

In addition to a few unique takes on the band's biggest songs, they also cover Deep Purple, Nazareth, and Blue Öyster Cult. Plus the album features maybe the best live take on "Turn The Page" since Bob Seger in 76.

Everything is presented without airbrushing, filled with complaints from James about the mix in his ears and a continued back and forth about the 8 count leading into each song. There's no polish, and it's obvious in-between each performance that this is outside the comfort zone for the mighty Metallica. But like pros, when the last cymbal count sounds they take off like they've been doing these acoustic shows for years. 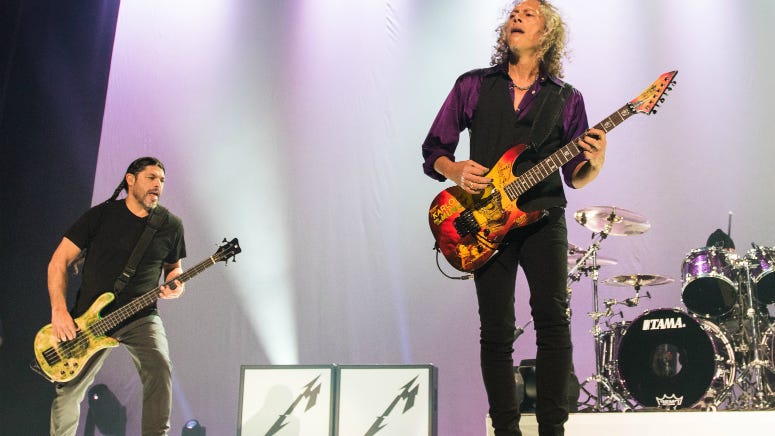 Metallica’s All Within My Hands Foundation continues to impact communities and fight against hunger. The band makes donations to local food banks for every tour stop, and continue to plan fundraisers throughout the year. You can find more details about AWMH here.