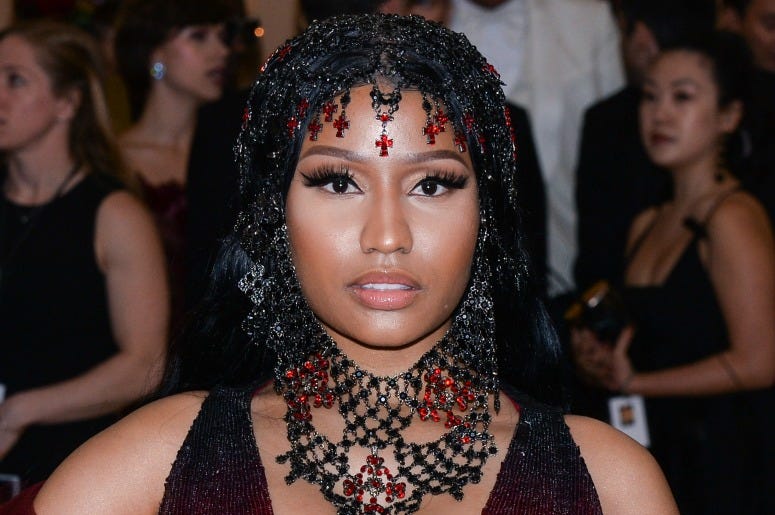 It was a whirlwind weekend for Nicki Minaj.

The “Super Bass” singer dropped her fourth studio album, Queen on Friday. The effort came ahead of schedule and features nineteen tracks worth of blistering, biting, tea-spilling realness from the MC. Eminem, Ariana Grande, The Weeknd, Future, Lil Wayne, and more are on the guestlist. However, it’s the solo B.I.G. sampling “Barbie Dreams” that has brought the most buzz.

The track is a takedown of the biggest stars in the hip hop community, taking shots at Drake, Meek Mill, and beyond. Nicki has insisted it’s all in fun, but it hasn’t stopped it from sending shockwaves through the scene.

One name missing from Minaj’s audio assault of “Barbie Dreams” is The Late Show host Stephen Colbert. Nicki stopped by the show on Monday night, and during her interview Colbert lamented being left out.

After a brief pause, Minaj added new bars to “Barbie Dreams”, rapping “I might **** Stephen after the show, he gon’ come back to work with a magical glow.”

That sent the host into hysterics. “Are we still broadcasting?” he asked as he worked to regain his composure.

Minaj then finished her verse, saying “but when you see us please **** don’t stare, just address me as Queen Nicki Colbert.”

“I don’t know where to go from here” said a flustered Colbert.

Minaj goes on to discuss the reaction from a few of the names mentioned in “Barbie Dreams”, and butts.

Earlier on Monday, Minaj also released the latest video from Queen, a dusty, sexy recreation of the album’s cover for “Ganja Burn”.