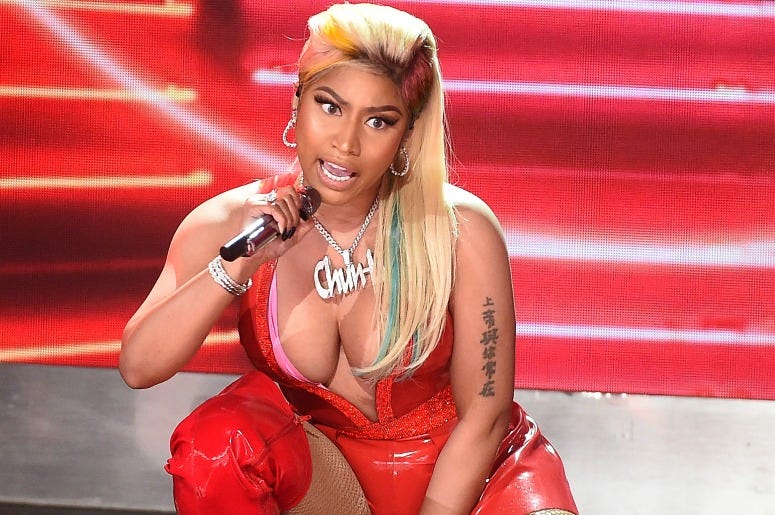 Nicki Minaj is not going to give up the throne without a fight. The Queen artist let off a string of fiery tweet this weekend, disputing Travis Scott’s album ASTROWORLD being the number one album in the country.

According to her calculations, that’s an empty victory for Scott. Minaj accused the rapper of padding stats with a tour promotion and the promise of seeing Kylie Jenner. “He knows he doesn’t have the #1 album this week. I love my fans for the #1 album in AMERICA!” she tweeted. “Billboard says they’ll change the rules cuz of this, so it should be changed now!”

In the end, Minaj labeled the tweetstorm as “sarcasm” or “dry humor”. It didn’t read very dry though. You be the judge.

Travis sold over 50K of these. With no requirement of redeeming the album! With no dates for a tour, etc. I spoke to him. He knows he doesn’t have the #1 album this week. I love my fans for the #1 album in AMERICA! I’ll explain on #QueenRadio 4 albums in, #1 in 86 countries ♥️ pic.twitter.com/CiYEuczgm3

My first album sold 400K. No one is doing that with debut albums now. So I’m so grateful. I lost out on 12 hours of sales and did 200K in one week after I was supposedly cancelled. I bit my tongue last #QueenRadio but I won’t On Tuesday. I love you guys so much

I looked at the numbers the Carters, Kanye, Nas, etc recently did. Travis sold 200K in his first week of clothes alone. I spoke to him last night & he said he’s been selling clothes b4 the music. Billboard says they’ll change the rules cuz of this, so it should be changed now!

I put my blood sweat & tears in writing a dope album only for Travis Scott to have Kylie Jenner post a tour pass telling ppl to come see her & Stormi. lol. Im actually laughing. #Queen broke the record of being number 1 in 86 countries. Thank Jesus & thank you to my fans.

People are calling me thinking I’m huffing & puffing. Omg y’all this is sarcasm/dry humor. Yikes. I’m having the most iconNIC time. Come let me kiss you. 😩😘😘😘 Who’s coming to the secret show? When people call me & hear me crackin up laughing they seem so puzzled. Loosen up 😅

But I did write a new freestyle n I’ll record it later. I felt it was time. #Queen pic.twitter.com/TEoKWGtYxh

Minaj is set to perform at a surprise location during this year's MTV VMAs. We'll see if she takes it to the stage, or leaves the "sarcasm" to twitter.