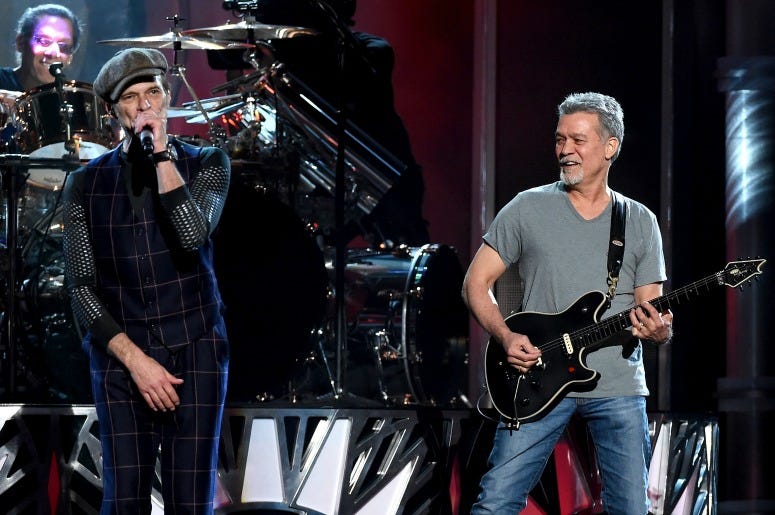 For the first time since 1984, a reunion of the original Van Halen lineup appears to be in the works.

In a new interview with Vulture, frontman David Lee Roth seems to reveal that they plan to tour in 2019, saying "when we come back through town in the summertime and do the original thing, maybe somewhere sportin’, maybe with somebody famous, I’ll make sure we get you all tickets so you can see what we do for gainful employment. My mom still wonders.”

In a weird, winding talk about his new tattoo skin care line, Roth hints at the possibility of the original four returning for a tour. The band last toured in 2015 with Eddie Van Halen's son Wolfgang Van Halen on bass in place of Michael Anthony. Anthony left the group shortly before Roth reunited with them.

"When Van Halen happens, I’m willing to answer all of these questions" Roth says when asked about a recent book on the band's early days. "And that’s around the corner by a hundred days."

"There’s a time-capsule element that goes along with my kind of music. You can’t keep serving it every year. We’re on a James Bond schedule, every three-and-a-half summers, so you don’t go, 'Weren’t you just here?' and then we’d start selling fewer tickets. That happened with the third Pirates movie. Johnny Depp was scarred, emotionally. But classic rock is great. It funded everything we’re doing today."

Roth goes on to hint towards playing Yankee Stadium, then clams up a bit before unleashing a laundry list of possible artists who could also be involved. "I can say that I contacted colleagues about being part of the show" explains Roth. "Metallica, Guns N’ Roses, Jason Aldean, the Foo Fighters, Church, and Stapleton. And they all said that, if everything happens, they would certainly be involved."

There's no word on if the "original thing" is certainly the original lineup, or if this is a tour, a festival, or a grandiose vision from one of rock's most notorious storytellers, but any return to the Van Halen legacy would be a welcome one for fans all around the world.

In the meantime, Roth would love if you kept your tattoos from fading, and you can do so with his new products here.