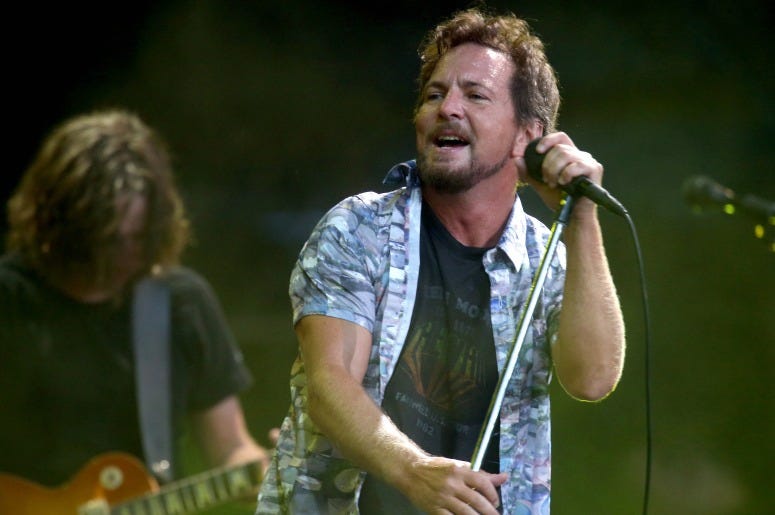 A Pearl Jam setlist is always sprinkled with a few special moments.

The band was especially reflective during their second “home show” at Safeco Field in Seattle on Friday night, as Eddie Vedder and company used the stage to pay tribute to some friends we’ve lost along the way.

First, the memory of Chris Cornell was honored with a performance of “Missing” from the singer’s 1992 EP.

The presence of Chris' band Soundgarden was also felt throughout the evening, as guitarist Kim Thayil later joined the group for covers of MC5’s “Kick Out The Jams” and The Stooges “Search And Destroy”.

Possibly the most powerful moment though came as Vedder acknowledged the loss of Tom Petty.

“The last two shows I’ve been thinking a lot about all our friends. I mean a lot of you are here, but some of our friends aren’t” said Vedder before the first encore. “The crazy thing is that the last time I saw Tom Petty was right here. He was right here about the same exact time last summer.”

“Just another friend who’s moved on, left us, and left us feeling like something’s missing” expressed Vedder. “But we have his songs forever.”

With that he led the crowd in an acoustic rendition of Petty’s “Won’t Back Down”, as the crowd lit the sky in remarkable fashion.

According to sources, the band’s two shows in Seattle helped raise eleven million dollars for the city’s homeless. Next up the band continues with the “away” portion of their tour with stops in Montana, Chicago, and Boston.