It's official. Prince Harry confirmed on Monday morning that Meghan Markle has given birth to a baby boy. The family is "thrilled" and Baby Sussex is doing "incredibly well", as the most anticipated child of the year has made a private but grand entrance into the world.

May 6th 2019 will go down in history for the Royal Family, and what better way to remember it than through music. 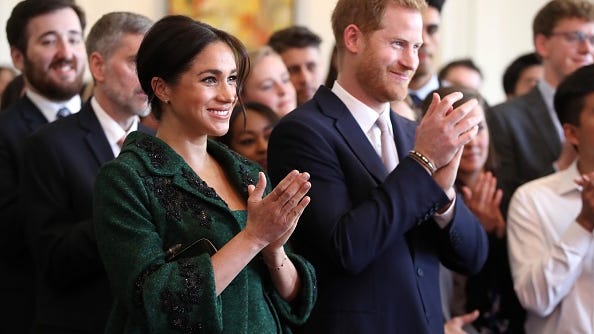 Forever when they talk about the events of this day, people will be reminded that "Old Town Road" by Lil Nas X was the number one song in the country when Baby Sussex arrived. The country trap song that has "the horses in the back" is linked through time with the latest Royal newborn, and Dad even made the announcement of the family's new arrival with, yep, "horses in the back."

The Duke of Sussex announces his wife has given birth to a baby boy.

We doubt you will find the inescapable anthem in Buckingham Palace, but you never know. It did get us to thinking though about the number one songs when the Royals were born. Take a look below at the top tune from the Billboard Chart when some of our favorite monarchy munchkins arrived.

Each is an instant classic for the kids, but what about the parents? Have the number ones stood the test of time for Harry and Meghan, Prince William and Kate Middleton?

Tina Turner - "What's Love Got To Do With It"

Congratulations to each of these members of the Royal Family, for being born with an amazing soundtrack in the states.

For now, Prince Harry and Meghan Markle have decided to celebrate in private, with more details about the new baby boy to be revealed soon. For the latest royal news, download the podcast, “Spilling Royal Tea” from RADIO.COM.