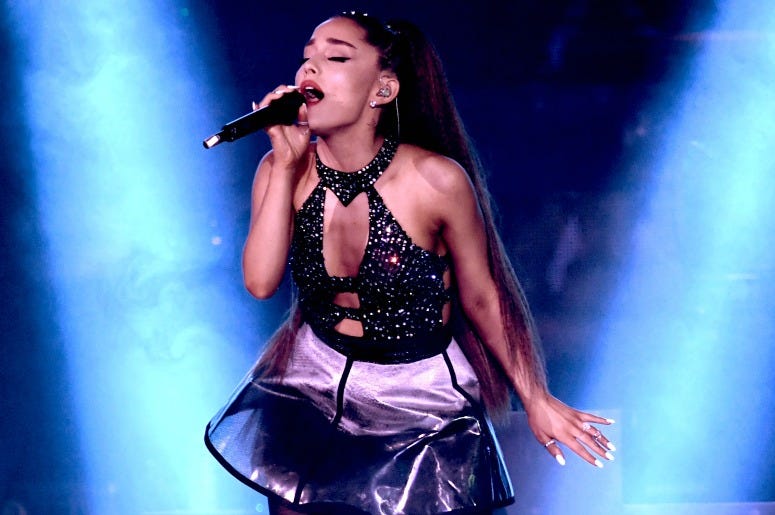 "It wouldn't be opening night without one thing going wrong" laughed Ariana Grande as she led her team of singers down the catwalk during "thank u, next" in Albany, NY on Monday night. The show was the first on her highly anticipated Sweetener World Tour, set to travel across the country and around the globe into October.

After images of tweets and candid Instagram photos flickered across the video backdrop, the lights went out briefly before the arena lit up in purple, with the opening chords to the number one song causing an eruption of the crowd. The song was her last of the night, but the singer suffered through microphone issues as the first verse started. As the crowd sang along, people scurried across the stage to swap mics, back with plenty of time for Grande to make her way towards the center of the arena. 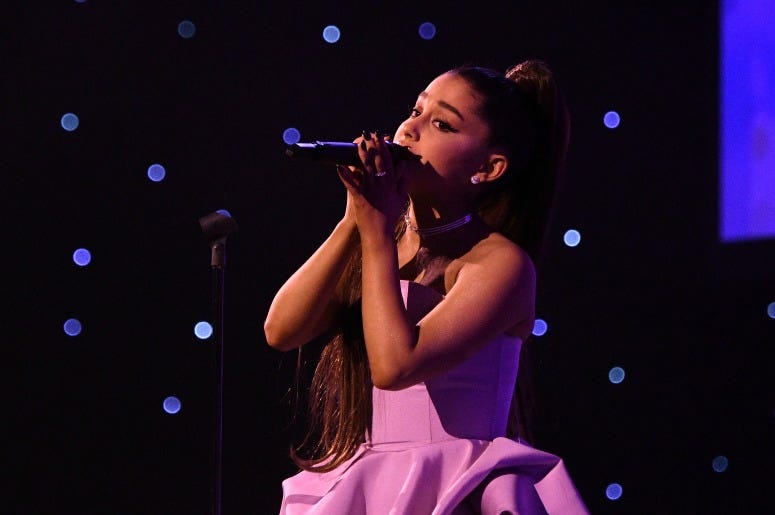 "Oh my god I love you so much" she screamed as the entire entourage of dancers joined her, engulfing her in a giant hug as they descended into the stage.

By all accounts the Sweetener World Tour is off to a successful start, leaning heavy on her two number one albums released within six months of each other. Opening with "raindrops", Grande's voice reverberates around the room as she first emerges with a pile of performers on the same table from her MTV VMA performance. They recreate that thrilling Last Supper-style set for "God is a woman" before the sinister, haunting plucking of "bad idea" lights up the arena. As the intensity swells, Grande swaggers through some top-notch chair dancing for "break up with your girlfriend, i'm bored." It's all part of only the first of five different acts in the show, separated by special interludes. An early sign that there's no letting up on this trek.

i really dunno what to say yet. for now, thank you will suffice. a dream come true typeeaa night. i love you. so much. thank you. @alfredoflores pic.twitter.com/7CiLiusqF8

In all, Ariana's ran through 29 of her biggest songs, spanning all five of her albums but with a heavy focus on the last year of music. The show was opened by Social House and Normani.

You can find the full setlist below, and the full list of upcoming dates here.

mhmm my mind is all over the place and v emotional. thank u. i don’t know what i’m posting rn tbh. at all. i’ll hit u tomorrow bc.... tonight was too much. thank you thank you thank you. i love you. and i yeah. i love this song @pharrell. i love u @alfredoflores. pic.twitter.com/vekZkxIH4E

God Is a Woman

Break Up With Your Girlfriend, I'm Bored

Break Your Heart Right Back

The Light Is Coming

No Tears Left to Cry