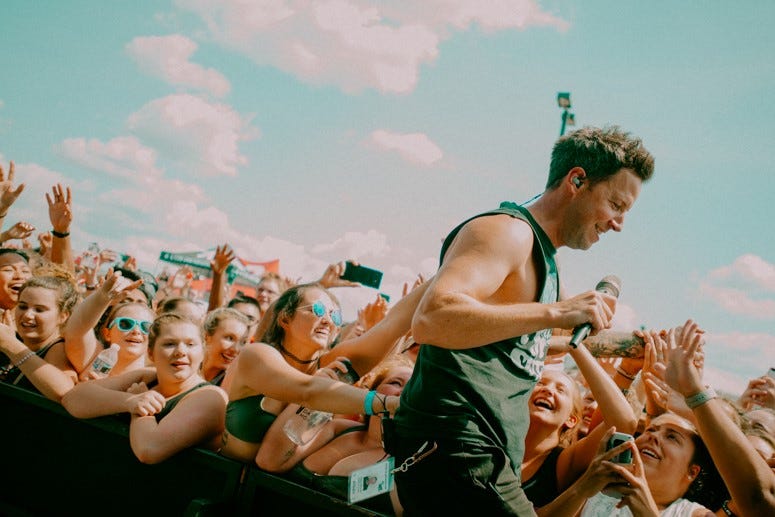 Slap some sunscreen on that thigh tattoo, Vans Warped Tour is taking its final lap across the country.

After over two decades as a blacktop tradition, the punk and hardcore festival is closing up shop. It leaves behind plenty of summer memories, a purse full of free stickers, and likely a long lists of bands you've discovered along the way.

"I will miss playing for all the fans and meeting all these bands" explains Johnny Christmas of Reel Big Fish, who's been a part of the band for eight Warped Tours. "We're starting to have people bring their kids. Which is really, really awesome that they feel that we are special enough that their children will like us."

"And we get a lot of kids coming to meet us and saying they need to get a picture so that they can make their mom jealous or make their dad jealous" laughs saxophone player Matt Appleton.

Reel Big Fish along with bands like Bowling For Soup and Simple Plan are a handful of the legacy acts that are relishing the chance to bask in the warm Warped light one last time.

"Nothing else in the entire world like The Warped Tour" proclaimed Mayday Parade singer Derek Sanders from the stage. "How amazing would it be if Blink-182 played the last one?" he wondered aloud to the screaming crowd. "That didn't happen" he laughed before honoring the trio with the name-checking cover of "The Rock Show."

Nostalgia is king on this last journey, but there is still plenty of room for the new regime. Artists like YUNGBLUD whose new album has earned him a spot in the same sentence as his idols like Arctic Monkeys, managed to pack them in for a sweaty set on the pavement.

"It's the best man" he exclaimed before his set. "It goes so hand and hand with my music because Warped Tour obtains that fundamental lack of fear to be yourself, and that fundamental unity of punk musicians who stand for something."

The Warped Tour continues to make its way across the country through July, wrapping up in West Palm Beach in early August.

Check out a photo gallery featuring Simple Plan, Mayday Parade, The Maine and more below!

To hear more from our talks with Reel Big Fish and YUNGBLUD, listen to the full interviews below.