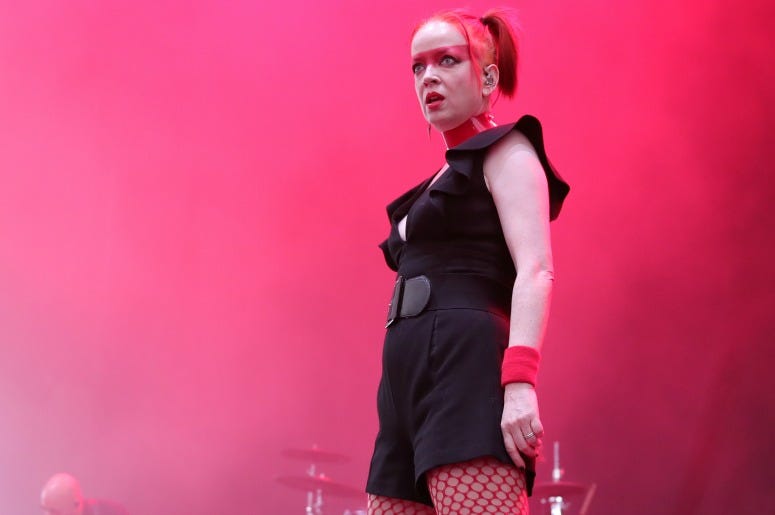 Version 2.0 from Garbage was bigger than you remember.

The band's second studio album was a statement of what alternative rock could be, dark and brooding when it was called for, hopeful and limitless at times, but all tied together with a sleek and stylish pop sensibility. The industry took notice, and honored the effort with a nomination for Album Of The Year at the 41st Annual GRAMMY Awards.

"I just remember arriving on the rep carpet, and Marilyn Manson was there with Rose McGowan, and then I bumped into Bono, and then I was passing Madonna and she told me she thought I was amazing" recalls Garbage singer Shirley Manson before one of the last dates on the album's 20th anniversary tour. "It was literally like a rock n' roll fantasy. It was like a Cameron Crowe movie."

The Album Of The Year category was bigger than just an honor for Garbage and their impressive piece of work, but the category as a whole was a celebration of women. These were strong, powerful women who transcended so much. Artists like Sheryl Crow and Shania Twain who refused to be contained by genre, and Madonna who had once again reinvented herself as a force in present pop. And of course there was Lauryn Hill, who had a star-making evening after the awards piled up for her album The Miseducation of Lauryn Hill, a modern masterpiece about life and love and being a woman from a pop perspective that had never been realized quite so completely.

It was a snapshot of success that Shirley Manson was excited for, but was also far too fleeting.

"I remember thinking, 'wow there's a lot of nonconforming women that are getting a lot of attention right now.' Whether it was Courtney Love, whether it was us, whether it was Lauryn Hill, Missy Elliott, the list is endless, Fiona Apple" explains Manson. "And then something happened. I mean, I've got a theory about it, but ultimately the world has become somewhat more conservative than it was in the nineties, and there's been a lot of aggressive moves towards women. I mean, we're currently in a peculiar moment in time where I really believe women are under siege. That affects culture, and affects music, and entertainment. When there is an intolerance towards women that affects every strata of our society and our culture. So yeah, I think it's a hard time for nonconforming women."

"It's a great time if you want to put on a sexy outfit and gyrate and twerk and take your clothes off and take a photograph of your buttocks. It's a great time for anyone who wants to do that, it's a difficult time for anyone who is sort of non-binary, nonconformist. It's a funny time right now and it depresses me I have to say. I feel very sad for young women who are being taught some very, very sad lessons by the current administration."

Manson goes on to talk about the current state of the GRAMMY awards and the comments made by Recording Academy President Neil Portnow regarding women's need to "step up" after last year's show. "They allowed him the good grace to apparently step away himself, they should have fired his ass" she says bluntly. "I think we're all suddenly aware that there's this old white patriarchy in play currently, and we need to eradicate it."

"I'm somewhat grateful that Neil Portnow made the comments he did because I think it really woke people up to what's going on, and if the GRAMMYs this year do not attend to some of that nonsense, I think they’re just gonna talk themselves out of business."

After a year of celebrating the 20th anniversary of Version 2.0, Shirley and Garbage are looking forward to new music and the next chapter in a cemented legacy. The band did some writing earlier this year, and has plans to head into the studio in 2019. Manson says we could see a new Garbage album in 2020.

"You don't know where life is gonna take you. These are our plans, we hope that we can fulfill them, but if not we'll just rumble along in the mad wave that life takes you and hope for the best" laughs Manson. "We understand how lucky we are. We're really very grateful. We can't believe that we're here, 25 years since the inception of Garbage, and that we're celebrating our second record, it seems obscene."

"Who would have ever pegged us to be survivors? So we're grateful."

The 20th anniversary deluxe edition of Garbage's Version 2.0 is available now. To hear much more from Shirley Manson, you can listen to our full interview below.