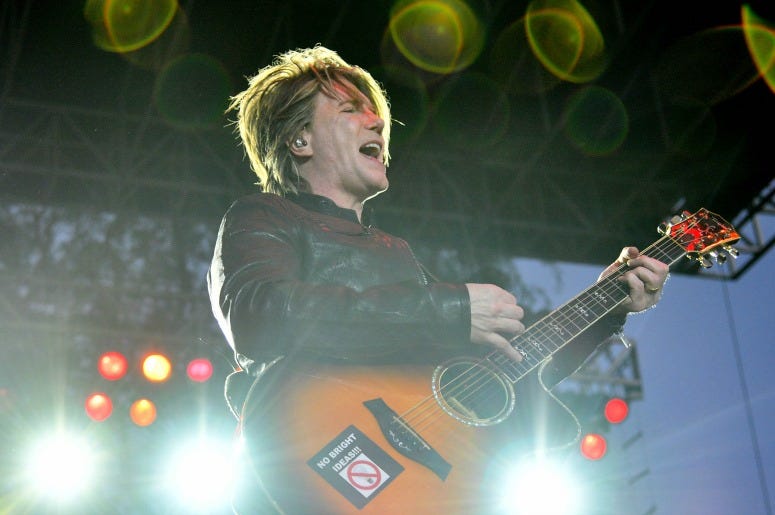 Twenty years ago, a group from Buffalo, NY went from MTV buzz band to inescapable multi-platinum Modern Rock heroes and beyond. The album, Dizzy Up The Girl, pushed The Goo Goo Dolls into a new stratosphere and made them stars, but every part of their success seemed unlikely at the time.

The band is currently touring the country, celebrating the twentieth anniversary of their most successful album. Dizzy Up The Girl featured two number one singles, sold over four million copies, and made the Goo a household name. But before it could happen John Rzeznik, Robby Takac, and the rest of The Goo Goo Dolls needed lightning to strike twice.

"We were doing really well, and I think that the band had a lot of confidence" explains singer John Rzeznik about the recording of the band's sixth studio album. After years of kicking around the scene, they had finally found a hit with "Name", opening new doors but asking a new set of questions. "I started getting a lot of fear in my head, because a song like 'Name' comes along, you write it, out of nowhere that song became a hit. I didn't expect it, I thought we were gonna sell our usual eighty-thousand records and go home."

"That song blew up, and I felt like I had just won the lottery" adds Rzeznik. "And everybody's like 'yeah John, that's amazing, do it again.' I'm like, how the hell am I gonna win the lottery again."

Rzeznik and company took their winnings from the "Name" lottery and invested it into Dizzy Up The Girl, hiring a big producer, working with an actual budget for the first time, and bringing in the right people to be a part of the process."We did what we felt were the best things to try to minimize us screwing the whole thing up."

The recording of the album brought the band out of several comfort zones, and into new scenery and scenarios in Los Angeles. It wasn't long before they would start throwing their own parties at the studio, realizing they didn't quite fit in the L.A. landscape.

"We could get into the velvet rope joints, but I got thrown out. The first one I went into they threw me out" laughs Rzeznik. "I whistled at the bartender because he wasn't paying attention to me. I'm waiving a twenty dollar bill, and he's just like, out!"

"We do a different kind of drinking in Buffalo, then they do in L.A." adds bassist Robby Takac.

"It's a different style" John explains. "The Buffalo drinker is, when you're poor and you're a Buffalo drinker, you start about 8 o'clock in the evening, with your friends at your house and a big jug of vodka that comes in a plastic bottle. Then when you're completely wasted from that, you're like 'ok it's midnight, now we can afford to go out.' Then you go out to the club - they're open till four in the morning - and then you just sort of ride, like a maintenance buzz till last call."

"So that's why we started having our own parties, so we could get Buffalo drunk."

Despite the parties and the fear of losing the lottery, The Goo Goo Dolls began work on Dizzy. During the recording, the band would be asked to make a song for an upcoming movie soundtrack. "We were making Dizzy Up The Girl at the same time, and it was just sorta like a side thing to do" remembers Resnick.

The side project would be "Iris." The song featured on the soundtrack for City Of Angels would go on to be the most played song of 1998, and the perfect introduction to the band's upcoming album.

"I never thought that song was gonna be a hit" adds John. "We were really sort of the dark horse on the album, and somehow it worked out for us. And we said, well we might as well put the hit on the album we're putting out."

Following "Iris", the album would be released that September. The song once again won the lottery, as did "Slide", and a four-time platinum album. The Goo Goo Dolls went from an underground Buffalo band to a mainstream success, but not everyone was on board.

"They didn't like us, the critics. After we got some success, it was like mainstream rock critics hated us" laments John. "Dizzy Up The Girl was reviewed a lot, negatively. But then you know, it got nominated for four GRAMMYs."

"We didn't win any of the GRAMMYs, but it was like alright that's cool. We got to go to all the parties."

The celebration continues for Dizzy Up The Girl into November, as the band makes their way around the country on the anniversary tour. You can find all of the dates here.

To hear more from The Goo Goo Dolls, you can check out the full interview below.