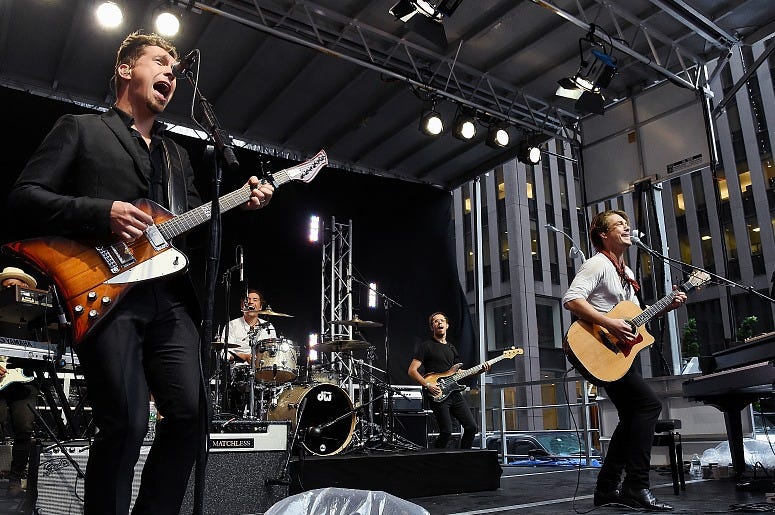 It's a rare thing for a band to actually grow up with their fans. Many mature, several age, but few literally grow up from adolescence to adulthood alongside the people who listen to them. They call them boy bands for a reason, as they often splinter and dissolve before they become men, but a bond of brotherhood has made Hanson an unusual exception, a band that has grown in sound and in family size throughout the twenty-six years since their inception.

"We saw that really early on, our fans were our peers, and they were engaging and connecting before they were even defining their adult identity" drummer Zac Hanson explains. "That's been a huge thing that's been positive for us, because despite the fact that some of those fans have become doctors and some have become tattoo artists, they still have these connections from being fans for a long time, of us."

"Now we see those fans who were ten, bringing their kids and that's a really cool thing. We've really never wanted our music to be pigeonholed to a stereotype or a group of people or something that someone can sell a product to. For us it's about life, and being multi-generational, looking out into a crowd and seeing people from all different walks of life, that's kind of the goal."

With that kind of loyalty built in, it would be easy for Zac Hanson and his brothers to rest on their success, continue cranking out holiday albums every other year and celebrating album anniversaries, but the landmark of twenty-five years as a band brought about a new wave of ambition for Hanson.

On November 9th the band will release String Theory, a double album featuring a fifty-five piece orchestra and the reimagining of some of their songs over the years. Add in a few fan favorites that have been reworked, a few new songs in the mix, and a tour around the country that has ballooned your band from four to nearly sixty people, and you've got a brand new challenge for the three brothers from Tulsa.

"It seemed like looking at that quarter-century, there was really an opportunity to start the next phase, the next chapter, in a way that really set the stage" Zac says of the band's new project. "You almost have this free pass to think about your legacy for a second when you get to be a band for twenty-five years."

Rather than just add instruments and arrangements to their songs, Hanson opted to tell a story, using the material they have written over the years to present a cohesive chronicle of chasing your dreams and overcoming the challenges along the way. They wanted to justify their choices, both in which songs they chose and in the orchestra incorporation.

"You're trying to find this intricate balance of keeping what's core to the song, keeping what's important" describes Zac of the song selection process, weaving the band's catalog in this new story. "We never want to run away from where we've been, that's part of our history. So we want people to feel that appreciation when you create a new arrangement."

String Theory is available everywhere on November 9th, and Hanson is currently on tour with an orchestra for the new album. You can find the full list of dates here.

To hear more from Zac about the "clash of culture" when touring with an orchestra, and the ever-growing family between the Hanson brothers, you can check out the full interview below.