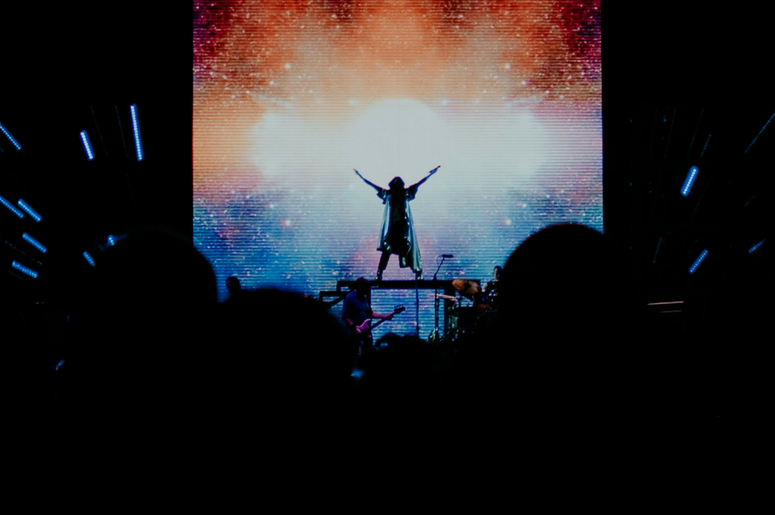 William Corgan is back to being Billy and he’s got the boys back together.

As you know, the Smashing Pumpkins have reunited for new music and a brand new trek across the country. The Shiny And Oh So Bright Tour finds Corgan back with guitarist James Iha and drummer Jimmy Chamberlin, but without bassist D’arcy Wretzky after a very public falling out with Corgan.

Three out of four ain’t bad, but Wretzky is super absent. In a show that’s steeped in nostalgia, D’arcy is avoided in classic band footage shown on stage and ignored in every aspect of the reminiscing. Don’t ever cross a Corgan.

The remaining members manage an epic three hour tour of their career led by Billy in a decadent display.  From "Gish" to "Solara," the band touches them all with enough space left in the setlist for a few choice covers.

Here are five things we saw at a recent stop with the Smashing Pumpkins.

Corgan and company take their time and stretch their legs this time around. With over thirty songs in their set, there is something for every Pumpkins fan. Siamese Dreams is now twenty-five years old and well represented, but so are favorites from Adore and Mellon Collie and the Infinite Sadness. This also inspires a trip down memory lane for the reunited trio, who are shown on screen in archival footage from videos and photo shoots throughout the years as the band soundtracks their own history.

There were plenty of Pumpkins hits to go around, but that didn’t stop them from tackling some of the biggest artists of all time. These aren’t just any artists to cover – Fleetwood Mac, David Bowie, and Led Zeppelin aren’t for amateurs.

“Landslide” has become a big part of the Smashing Pumpkins catalog, but the spaced-out shoegaze take on Bowie’s “Space Oddity” was a surprise. Even more surprising was their rendition of “Stairway To Heaven”, which featured a religious shrine of Corgan making its way around the arena floor.

“As a young man playing guitar I could have never imagined playing Stairway To Heaven in an arena” remarked James Iha. It caught us off guard too, but we were pleasantly surprised.

3.  Stage Within A Stage

Almost as impressive as the Pumpkins performance is the massive Shiny And Oh So Bright Tour stage. What starts as a stark setting with Corgan singing an acoustic version of “Disarm”, quickly becomes an arena-sized platform featuring the full six member band. Throughout the evening, things transform to reveal more screens and outfits and a neon-lit piano for a portion of the night.

There’s no question that the center of the Smashing Pumpkins universe is Billy Corgan. From the very beginnings with a collage of his childhood pictures to the religious imagery throughout the night featuring his face, every aspect of the evening belongs to Billy. Dressed in several capes and shimmering silver wraps, we were all attending Corgan’s goth prom and he was booked as the entertainment.

After all the years and lineup drama, the soaring sound of Corgan and the gigantic riffs of the Smashing Pumpkins are still like nothing else. It’s worth sifting through the antics and the Machina songs you forgot about to hear that guitar echo out the chorus of “Today” or to hear Corgan pierce the sky while singing “Tonight, Tonight”.

The Shiny And Oh So Bright tour continues to make its way across the country through August and September. You can find the remaining dates here.

Also, the band has lined up an impressive guest list to celebrate their 30th Anniversary this week. Mark McGrath will join members of AFI, Joy Divison, and The Killers to help the Smashing Pumpkin celebrate the milestone with a show in New Jersey on August 2.