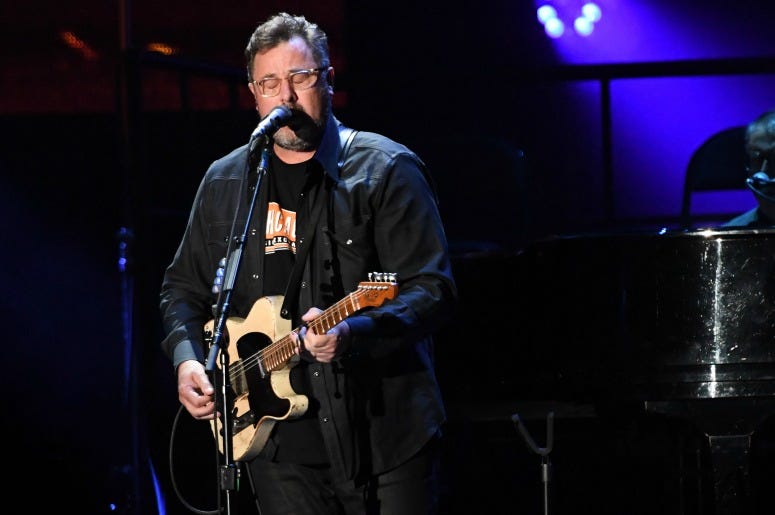 Vince Gill is currently on the road with the Eagles playing stadiums and arenas around the country. The country star stepped in for the group after the death of the legendary Glenn Frey.

“I kind of have always tried to be as beyond respectful as I could about getting to do this” Gill explains in a new podcast with Foo Fighters guitarist Chris Shiflett. “It’s a great thrill, but the only reason I’m getting to do it is because something tragic happened.”

“I can feel it from people” he continues. “When I start singing ‘Take It To The Limit’ or I start singing ‘Lyin’ Eyes’, I can see them just kind of just going ‘I’m not sure about this, we’re pretty used to hearing Glenn sing these songs’. Then after a few verses or a chorus or two I can feel it. I feel the room just kind of go ‘it’s ok, I think we really are here because we love these songs.’”

Elsewhere in the interview Gill reveals that he once got the invitation to join Dire Straits before he found solo success. He had made four unsuccessful solo records and got by on session work when the band's co-founder Mark Knopfler offered to bring Gill along on tour. Vince ultimately turned down the offer and told Knopfler, “I got a new record deal and if I bail on it, it would kind of be admitting failure.”

Gill turned down “the sure thing”, but over twenty-five million albums sold and 21 Grammy Awards probably ease the pain.

For more on the Eagles tour, check out their remaining dates here.