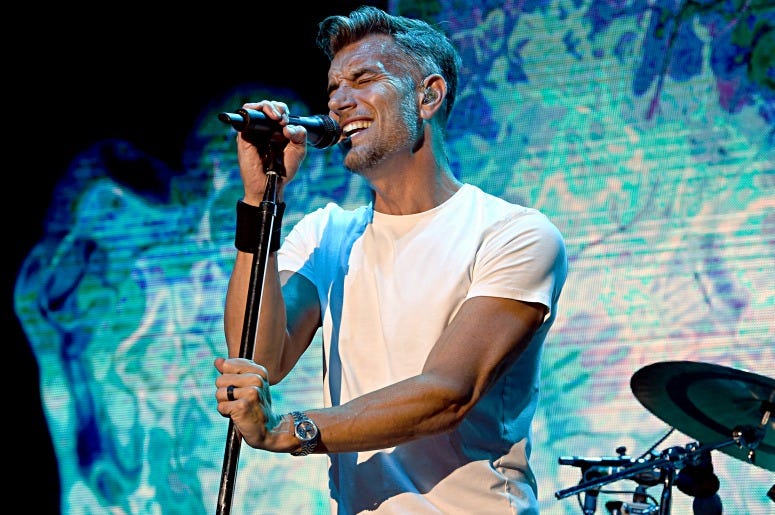 "Summer's so much fun. Being outside is great, getting everybody together is what we're good at" explains P-Nut from the band before they took the stage at the 25th anniversary of the Vans Warped Tour. "We would be doing it if there was no audience. We'd be doing backyard jams. Dad jams."

"We'd be a legendary dad band, but you know, this is working out too."

The vibe of the band has become synonymous with summer, lending itself to all of its celebrations, like the Vans Warped Tour. "I just love that back in 96, we went from the Cypress Hill 'Temples Of Boom' tour, to the H.O.R.D.E. tour which was the hippie fest, to the Warped Tour" smiles singer Nick Hexum. "We're like one of the only bands that can fit in, in all three scenes so that was kind of cool."

311 took part in the first of two events honoring 25 years of the Vans Warped Tour this past weekend. After a severe storm rolled through Atlantic City, NJ, the band took the stage. Overcoming mic issues just in time for the finale with "Down", it's nothing compared to some of their previous Warped memories. The band has been in and out of the lineup throughout the festival's history, even taking part in the first Australian version of the show.

"I wish we had more footage of it" explains P-Nut. "Warped Tour's always a little bit throw-and-go, you never know exactly what's gonna happen and that's most of the fun, but in Australia is was all brand new. We were setting up tents every day to sleep in. If there wasn't room in the vehicles, you would set up a tent for yourself, and it just kind of went off from there."

"It was brutal and honest."

This week, 311 kicks off their own summer tour, without tents. It's the early lead up to the band's 13th studio album, Voyager, due out on July 12th.

"I think on the last album, Mosaic, we kinda kicked open a new door stylistically. Combining some new things and working with some new people and new production techniques" Hexum describes. "Now we just kind of sashayed through that door, just further expounding on it. We just got a lot of momentum right now and we're really excited."

"We just try to express our full range of emotions, which is all kinds of stuff" he continues. "Ultimately music is about bringing people together and that's what our tours and that's what our band is about. Promoting unity and to share the human experience. People love to relate, so we just keep putting our heart into our music and people can feel that."

To hear much more from 311 on their upcoming album Voyager and the music they share with their kids, check out the full interview above.

You can find the full list of upcoming 311 tour dates here.