Cardi B was born in The Bronx in 1992, which doesn't exactly make her an expert on the '90s. But wow, she still manages to slap on bracelets with the best of them.

In a new video for Reebok, the GRAMMY winner takes on challenges from the decade. "I feel like I'm in the Saw movie, you guys are making me do things" she says between completing a snap bracelet challenge and rocking the Macarena. 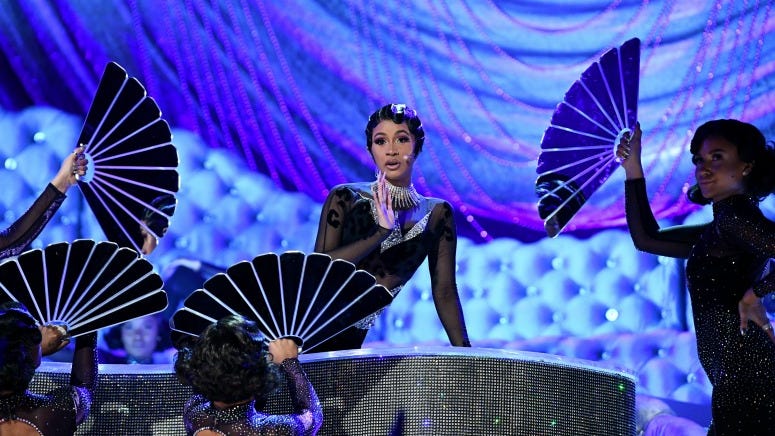 After the bracelets they asked the skilled communicator to kick it old school by sending a fax. "I don't know how to use that" she yells. "Sorry. I want another challenge."

The true test comes when they ask the "I Like It" singer to help define some '90s slang, like "talk to the hand" or "all that and a bag of chips."

"Hoopty just mean, like a busted ass car" she explains. "You talking **** about my hoopty but you walking though."

As expected, she has the slang locked down. It's probably something she picked up while recording the '90s style slow jam, baby-making, Jodeci-flexing song "Please Me" with Bruno Mars, which has a video dropping on Friday.

PLEASE ME MUSIC VIDEO WILL BE OUT FRIDAY !!

In addition to the new video, Cardi B has just announced another string of tour dates for this year. Along with music festivals like Bonnaroo, Cardi will play arena shows in Tulsa, Wichita, Lincoln, Minneapolis, Indianapolis, and Charlottesville. You can find the full list of dates here.

At the GRAMMY Awards, we had a Cardi B challenge of our own, asking people to give us their best "OKURRR." Check out Lauren Jauregui, Mark Ronson, and more trying it out.